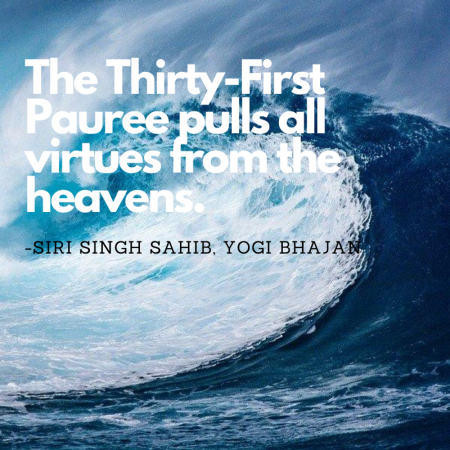 “The thirty-first Paurī pulls all virtues from the heavens.”

In the 31st Paurī, Gurū Nānak states authoritatively that God prevails everywhere in the Cosmos. He tells us, āsaṉ lo-i lo-i bhanḏār; that God has His seat in every world. Again Gurū is telling us that there are worlds upon worlds that we, as mortal humans, are unaware of.

Yet the same Ek Ong Kār presides in everyone, with the same presence and authority as in this world of form and cause and effect in which we dwell.

Then, Gurū Nānak reveals something extraordinary, jo kichh pā-i-ā su aykā vār; essentially, that everything that exists was created together and all at once, and that what was created is enough forever.

So here, Gurū Nānak suggests the concept of the Big Bang Theory, nearly 500 years before it became a widely studied scientific concept. Yet he states it with the serene confidence of one who speaks from the knowledge of experience, rather than philosophical speculation.

He continues with the line, kar kar vaykhai sirajaṉahār; after creating the Universe, He watches over it, this is also translated as “He beholds it,” which in some ways confirms the Biblical concept that “God saw what He had done and it was good.”

More than that, however, Gurū Nānak is assuring us that the Ek Ong Kār is always present at all times and in all things; that He created this creation and lovingly watches over it.

With this affirmation, Gurū humbly states: Salutation! My humble salutation to You again and again! Then he makes the profound affirmation: The Primal One, the Pure Light, without beginning, without end. Throughout time you remain the same.

This simple Paurī of only three couplets is powerful and deep. At the same time it continues to explain the unlimited, unchanging vastness of Ek Ong Kār, while assuring us, He is ever with us and watching out for us. 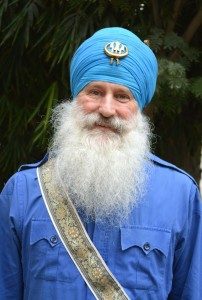 Gurutej Singh Khalsa is a yogi, warrior, businessman, poet, healer, and teacher. For 35 years he studied Kundalini Yoga and the teachings of the Sikhs from his teacher the Siri Singh Sahib, Yogi Bhajan (1929 – 2004). As a trained law enforcement officer, Gurutej was a personal bodyguard and aide to Yogi Bhajan and traveled the world with him. Gurutej is a respected and recognized teacher, speaker, healer, and counsellor and has taught Kundalini Yoga, the science of meditation, and the teachings of the Sikhs all over the world. In 2001 he published a book of poetry, Children of the Cusp, about his experiences as a student on the spiritual path under the guidance of a great teacher. In 2014 he published his moving and inspiring novel RAJNI, which was awarded the Gold Seal of Literary Excellence. Drawn from myth, legend, and historical events and the first of a trilogy, RAJNI is a deeply moving epic about the powers of love, sacrifice, and the elevation of the soul. Gurutej Singh lives in Singapore with his wife and son.