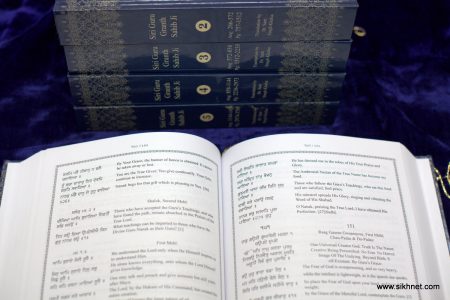 The Siri Guru Granth Sahib is usually embodied in a large, all Gurmukhi single volume. This is referred to as a “Bir”, meaning something that is fastened together. Today, with the world-wide demand to have access to understanding the meaning of the words of the Siri Guru Granth Sahib, there are many copies of the Siri Guru Granth Sahib available in translation; English, Spanish and several other languages. These translations are generally produced in multi-volume sets. The complete set of volumes can be installed on a separate Palki (stand or cabinet) to the side of the Gurmukhi Bir. This translation can be used to read the daily Hukam aloud to illuminate the sangat in the meaning of the words of the Guru. The translated multi-volume set may also be used during an Akhand Paath in which the participants are not fluent in Gurmukhi.

All printed volumes of Gurbani should only be handled by people who have covered their head and have clean, freshly-washed hands. It is common to wrap such books with cloths, called Ramaalaas, or to use a made-to-fit slip-on fabric cover. It is never acceptable to place such books in a place that is not clean, such as directly on the floor or on the ground.

When carrying the complete set of a multi-volume of the Siri Guru Granth Sahib, it can be quite heavy. So, although it is protocol to carry the single-volume Gurmukhi Bir on one’s head (with a Ramaalaa between the volume and your head and a Ramaalaa covering the Bir) it is not necessary to carry the multi-volume set on one’s head. It can be carried carefully and gracefully in front of the person. It is common and appropriate to keep the complete set of volumes in a cabinet or display case. The whole case, with the volumes inside, can be carried as one.

When carrying only a single volume of a multi-volume set, the individual volume should be treated with the same respect given to a Nitnem or Gutka (a book that contains some Gurubani scriptures). It should be covered gracefully with a Ramaalaa (special cloth cover used to preserve the sanctity of the Siri Guru Granth Sahib) and only handled with clean, freshly washed hands. It also does not need to be carried on one’s head.

If a volume is simply being moved a short distance from the cabinet in which it normally resides to be used to translate the reading of the Daily Hukam (as when the multi-volume set is located adjacent to the single-volume Gurmukhi Bir), there is no need to cover the single volume with a Ramaalaa.

When a multi-volume set is installed as “the Guru,” as when it is used for an English Akhand Paath, or if one is keeping the set in a Gurdwara in their home, it is suggested that it be treated with the same protocol as the single-volume Gurmukhi Bir.

When the Guru is moved from one place to another, it must be with grace and respect. An Ardas is performed first. The Guru is then carefully picked up and placed on the head of the Granthi, and covered with a small ramaalaa, or white cotton cloth. If possible, have others proceed ahead of the Guru with swords drawn, for protection and to show respect. Another person may walk alongside or behind the Guru, waving a Chauri Sahib.

Those who accompany the Guru are encouraged to chant, as a group any mantra. “Sat naam, siri waahay guru,” or another mantra such as Kal akal siri akal maha akal, akal moorat, wahe guru can be used. When the Guru enters or leaves a room, all Sikhs stand and face the Guru. When the Guru is set down on the Palki, the Sangat chants, Wahe Guru ji ka Khalsa, Wahe Guru ji ki Fateh! and then (the sangat sits down). The Guru Granthi seats him/herself first, and then places the Guru on the Palki Sahib.

If the Guru is transported in a car, it must not be put into the trunk. It must be placed on cushions, on a seat next to a sevadar, or carried on the lap of the sevadar who guards and cares for it during the journey. A respectful vibration should be maintained, with a minimum of conversation.

Traveling with a multi-volume set of the Siri Guru Granth Sahib can be more easily done if the multiple volumes are divided into two or more groups to be carried in different clean carriers. When a mulit-volume set is divided, it no longer is seen to be the embodiment of the Shabad Guru. Therefore, the protocols associated with the handling and moving of the Guru are no longer applicable. These single volumes or partial groups of volumes are treated with same protocols as with Gutkas or Nitnems.