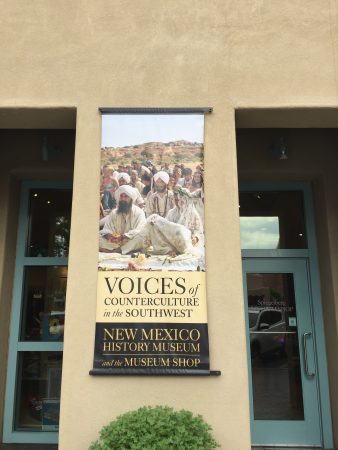 Santa Fe is busy in the summer. It is one of the top tourist destinations in the United States and hosts more than a million people each year.  The historic Santa Fe Plaza is the heart center of the town and is the destination of all visitors at some point in their trip.

Saturday July 9th, the 3HO Sikh community of Española co-hosted a day on the Santa Fe Plaza along with the New Mexico History Museum as part of the museum’s fascinating 2017 exhibit: Counterculture, Communes, and Consciousness in the Southwest. The museum tells us, “As the year 1967 heated up and the “summer of love” dawned via concerts and gatherings on the West Coast, New Mexico was experiencing its own social and environmental revolutions. Young people from across the nation flocked to alternative living situations at burgeoning communes and issues of justice, identity, and social norms came to the surface in the form of activism across the state.”  This wonderful exhibit documents New Mexico in the mid-1960’s and 1970’s and has a section on the founding of the 3HO ashram in Española – Hacienda de Guru Ram Das.

Open to every and free for all, the event “3HO Sikhs on the Plaza” ran from 1pm – 5pm.  It opened with a 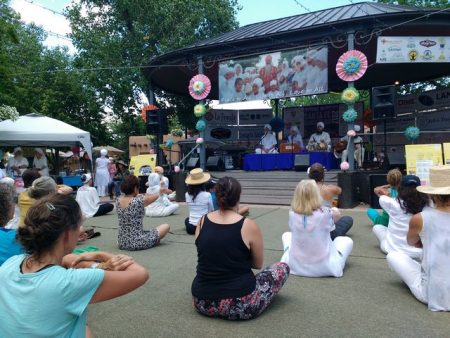 wonderful yoga class taught by our own Nirvair Singh, CEO of KRI.  Nirvair sat on the gazebo in the middle of the plaza, and taught a beautiful class to the 80+ people who had gathered to the sound of his voice.

As the rest of the day unfolded there was information about 3HO, KRI, and the Sikhs, beautiful music by the 3HO musicians, and sweet, cold Yogi Tea for all. There was a “Try-a-Turban” booth where volunteers tied Sikh turbans on the curious and the willing.  It was a huge success and over 120 people left the plaza with colorful green, red, and yellow turbans. Towards the end of the day, the Plaza was jumping with the sounds and moves of “Bhangra”, northern Indian dancing that is a favorite of the Sikhs. 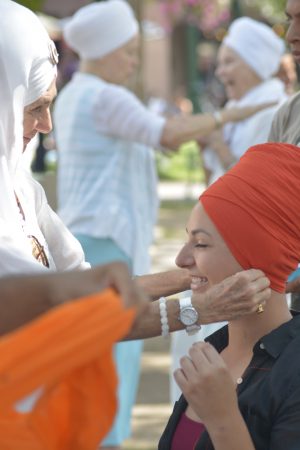 As the day ended, more than 1,000 people had visited the booths, drank Yogi Tea, listened to music, or did a little yoga. What a great day! This was the first event of its kind for the 3HO Sikh community in New Mexico and we hope to see more in years to come!  We extend a big “Thank You!” to the New Mexico History Museum and the beautiful people of Santa Fe who keep the heart of love beating in New Mexico.