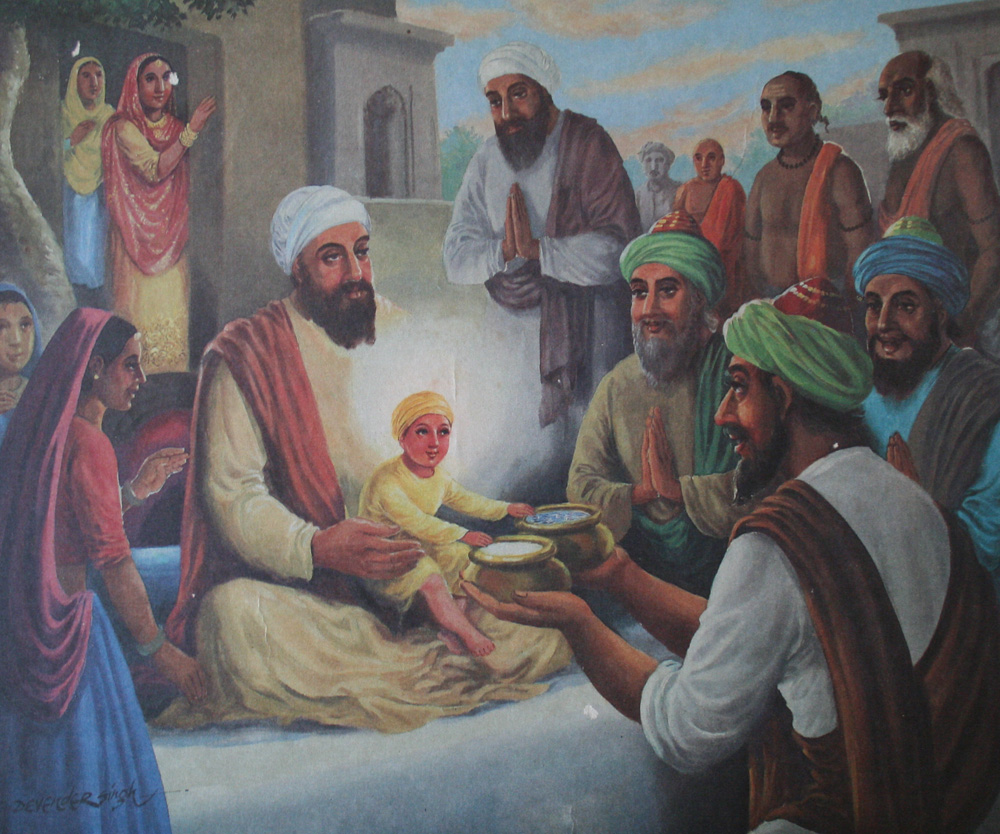 Listen to this story:

Bhikan Shah was a well known Muslim saint. He was very devoted and honest. Everyone respected him. Each day he and his followers would bow towards the holy city of Mecca. One day he did something he had never done before. He started bowing in the opposite direction of Mecca! His students and followers were surprised! They thought, “Is he going senile? Did he forget which direction Mecca is? Every day we bow towards the west, towards holy Mecca. Is he trying to test us or is he crazy?!

So they asked him, “Sir, you are bowing in a different direction. Why are you doing this?” He said, “If you could see what kind of a being has taken birth there . . . you would bow in this direction too.”

Bhikan Shah decided to go to the town of Patna. He felt that a divine soul had incarnated there. Not just a messenger of God, but that a part of the all merciful Allah Himself had taken the form of a human body. He saw it in his vision. He felt it in his meditation. He knew that this incarnation was the embodiment of peace, of justice, of mercy, of truth and of love. And so the wise, intuitive and devoted soul named Bhikan Shah went to visit this great soul in Patna

He found out that in the Guru’s house, a child had been born to Guru Teg Bahadur, the holder of the throne of Guru Nanak. The boy’s name was Gobind Rai. Bhikan Shah made the journey to Patna. When he got to the Guru’s house he asked if he could come in to see the child.

Well, Guru Teg Bahadur was not in Patna at the time, he was teaching and inspiring people in far off lands. The Guru’s family was there to protect the divine child. They thought, “There are many people who hate us. Some of them may want to harm Gobind Rai. Let’s not forget that people tried to have the sixth Guru, Guru Hargobind killed when he was only a little baby. We don’t know who this Muslim is, maybe he was sent by the Emperor.” So they did not let Bhikan Shah come in

Bhikan Shah was very determined, so he stayed at the door for a long time. Occasionally someone would come out and talk with him. Soon enough they felt that he was a sincere man and that he had seen a divine vision of the child. He was allowed to come in. He brought with him two pots.

When he met with the baby the old man and the infant seemed to recognize each other. Bhikan Shah placed the two pots in front of Gobind Rai, With his playful spirit, he reached out both hands and put one on each pot. Bhikan Shah became very happy and left the house of the Guru in good spirits.

The relatives of the Guru and the Sikhs asked him what this funny scene was about.

Bhikan Shah explained, “One of the pots represented the Muslim faith, the other represented the Hindu faith. I was asking him which he would favor. Naturally he chose both. Which means he favors all people and all religions. This divine blessed soul will be the protector of all humanity.”

And so it was that Guru Gobind Singh defended all people against those who wanted to attack them, and he set up the universal army of the Khalsa that will always protect all of humanity.