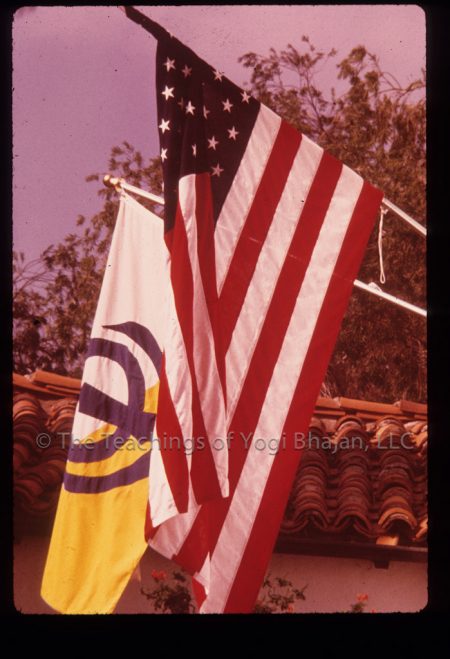 We stood outside the facilities in McAllen, Texas, in the parking lot across the road, and looked at the United States flag that was flying in the courtyard. I’ve never been particularly prayerful, as a child I refused to say my evening prayers before bed. That’s still my innate response to anyone asking me to pray–resistance. What’s more,  I’ve never been particularly patriotic, at least not in regard to any flag or tribe of any kind. I’m wired differently, I guess. So it was an interesting experience to stand there, looking at the flag flying outside what looked like an innocuous warehouse, and to know that, inside, human beings were being held in cages for nothing other than seeking asylum, which is not a crime.

I stared at that flag, with everything I’d been taught that it means, and I offered a Sikh Ardas. This particular prayer is about 300 years old, and it talks about the sacrifices that were made in order to have an identity–an infinite identity. Some of the lines speak about that sacrifice; some speak of forgiveness, seeing the faults of others and overlooking them; some speak of our oneness and our willingness to be accountable for ourselves and other people; some of the lines acknowledge our missteps. Inherent in the Ardas is the idea of forgiveness, it’s embedded in the language; it’s embedded in the very notion of hukam, the reality that we cannot be outside of God’s will.

We then took a hukam; and that moment of looking at the flag and offering a prayer from this path that I’ve adopted was one of the more powerful experiences I’ve ever had. Because of my innate resistance to prayer, because of my own internal cynicism, I mean, “What’s the point of the joint?” it had an impact on me; this offering affected me. I could feel the vibration of my darshan, my eyes seeing the flag, and my words vibrating the experience of forgiveness. Then the language of the hukam came: “No one comes to help; where do we go? No one is showing up.” It was a really devastating hukam. I had never read a phrase like that from the Guru before. It spoke of the powerlessness we felt, but more than that, it pointed to the absolute powerlessness behind those walls, beyond our reach. There we were trying to help, but there was nothing we could do other than offer this prayer.

One would think that as a sound and mantra specialist for the better part of 20 years that I would understand frequency at this point in my practice, but I’m continually struck by the power of vibration. I recently ran across a quote, “it’s not what we say, it’s what we vibrate.” And there is a difference. We talk about that difference when we talk about singing versus chanting versus vibrating.

Vibration is the intention, the conscious intention; vibration is our frontal lobe being engaged in prayer, in frequency; but it’s also our subconscious agenda, what do we actually believe, what do we actually feel when we offer those words? If there’s a huge gap between what we’re saying and what we actually vibrate, it doesn’t work (and sometimes can make it worse!)  But when there’s no gap between how we present ourselves and what we know is true, our internal experience of ourselves, that’s frequency, that’s vibrating!

As I stood and held this space for the prayer, the flag and what it symbolizes–to be a US citizen–struck me. What does it mean to hold the words of our foundational document as true? The internal gap between what our projection, our rhetoric, as Americans has always been and what our actual policies and international relationships look like–well, that’s a huge gap. We as conscious people have to begin vibrating into that gap and mending it.

We need to vibrate so that the dissonance of who we have long projected ourselves to be–”give me your tired, your poor, your huddled masses yearning to breathe free…”, a nation of immigrants, a nation whose foundation was built upon the “right to life, liberty and the pursuit of happiness”–and what we have been and are becoming, a nation on the verge of fascism, can heal and be made new. If we collectively offer our prayer and vibrate what it means to be community, if we can acknowledge our tremendous shadow, our incredibly dark past, together, then maybe we have a chance. This is not the first time we have separated children from their families, and this is not the first time we have said, America First. It’s a shadow that we have to be alert to and challenge, with everything we’ve got.

Because the frequency of this country is that people come here to realize themselves; people come here to realize their own potential. All who came here voluntarily share that same story (and I hope you heard the word voluntarily). If we vibrate together, then we have an opportunity to see ourselves more clearly, to make amends for our past and set a new course based on our highest ideals, together.

Democracy is hard, democracy is messy. Community is challenging. But I know, for myself, that I can’t see myself clearly unless I see myself through other people. If we want to go into the cave and vibrate on the bowl, great; but that’s not what the Aquarian Age is about, that’s not what the United States is about; and it’s certainly not what this little community of Kundalini Yogis and Sikh Dharma is about. It’s about seeing each other reflected in each others eyes, it’s about the foundation of perfection found in forgiveness, pre-forgiveness, expressed in the Ardas.