The Royal Indian Marine whose ships were armed in 1914 served with the Royal Navy as auxiliary cruisers on escort duties and others as river gun boats in the Mesopotamia campaign or as coastal minesweepers. The Royal Indian Marine was also responsible for the fitting out and dispatch of the vessels conveying the expeditionary forces sent overseas from British India.

There are 15,519 Burial places (Smaads) of British Indian soldiers and 64,963 are commemorated by Memorial thus total of 80,482 have died in Ist World War (1914-18) according to the register of Common Wealth War Grave Commission.

But I am sure there are many more British Indian casualties whose names were never recorded and who are by consequence not commemorated. I think this is due to the battle circumstances and perhaps poor administration. I give you some examples:

“The losses of the 57th Wilde’s Rifles and the 129th Baluchis were great during the last two days of October 1914 (during the 1st battle of Ieper). The Wilde’s Rifles lost 300 out of 750, the Baluchis had 240 men killed, wounded or taken as POWs. 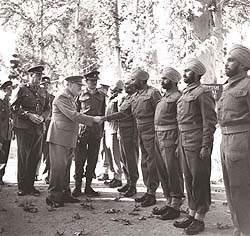 In 2nd World War, a company of the Royal Indian Army Service Corps was part of the British Expeditionary Force in 1940 campaign which ended in the evacuation from Dunkirk (France). Divisions of the British Indian Army fought in the Western Desert, in the Middle East, in Eritrea, Ethiopia, they fought in Italy at Cassino, Florence, Forli, Ravena, Sangro River and took part in the liberation of Greece. But against Japan in the east, the British Indian Army played its greatest role right through from the reverses of 1942 to the final overwhelming victory of 1945.

Till 1945, the Royal Indian Navy was a strong force of 28,000 officers and men and took part in action in the Red Sea, the Indian and Atlantic Oceans, the Bay of Bengal and the Mediterranean, also in the combined operation of the coast of Sicily and Burma. Their role in transporting the armies and essential supplies even to the civilian populations cannot be forgotten.

The Royal Indian Air Force played its role from the beginning of 2nd World War (1939) with one squadron and strength of 200 officers and men. It had grown by 1945 to the strength of 28,500 and nine squadrons. It saw action throughout the Burma campaign. British Indian officers also served in the Royal Air Force in Burma, Europe, and other theaters.

To honor 300 years of Khalsa and the sacrifice of Sikh soldiers during World Wars, the City of Ieper together with the European Sikh Community organized a Celebration of Peace on Sunday 4 April 1999 at Cloth Hall in Ieper, Belgium.

Flt. Lt. Mohinder Singh Pujji, a pilot of Royal Air Force who took part in the European campaign was honored along with several living soldiers of World War II by Governor Paul Brijne of Inflanders Province. Flt. Lt. M.S. Pujji has stated, “I was posted to No.253 Squadron RAF, flying Hurricane IIB fighters from RAF Kenley, which is a couple of miles south of Croydon. We were a mixed bunch, with pilots also from Poland, America, Canada and Australia. Equipped with twelve machine guns, our hurricanes were extensively flown day and night, to intercept German bombers and reconnaissance aircraft.”

Engraved on the graves of Sikh soldiers is Ik Oankar Siri Waheguru Ji Ke Fateh Sanskare Gaye in Gurmukhi. Sepoy number, full name, name of the regiment, and date of death are all printed in block letters in English. TheseSmaads of the Sikhs can be found across Europe, Middle, South & Far East Asia and Africa. They are well maintained, cleaned and decorated by Commonwealth War Grave Commission.

As I said earlier that the actual number is much more than has been recorded by the Common Wealth War Grave Commission. Research is needed by Government of West Punjab (Pakistan) and by Government of East Punjab (India) as most of the casualties are from united Punjab. Hence the recorded history of British Indian soldiers who died in both Wars is:

Besides this, more than quarter of a million were wounded, ill, or prisoners of war.

“In the last two world wars 83,005 turban wearing Sikh soldiers were killed and 109,045 were wounded. They all died or were wounded for the freedom of Britain and the world, and during shell fire, with no other protection but the turban, the symbol of their faith.” 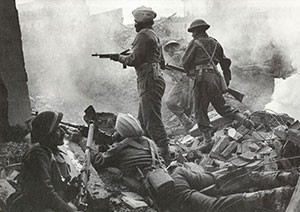 Most of the People in Punjab do not know that their forefathers, the Sikhs have fought gallantry in Europe including Italy in the 2nd World War and played an important role for the liberation of Europe and paid heavy price for the freedom of mankind along with Allied forces as part of the forces of the Commonwealth. The total Allied casualties killed, wounded and missing were 312,000; of these, 42,000 of the killed belonged to the forces of the Commonwealth in Italy. Sikhs, Gorkhas, and Muslims, the traditional warriors have a great history in Italy during that terrible and painful period of war.It is interesting to note that in Italy, Sikhs are living in large number (about 90,000) next to England in Europe and have established more than two dozen Gurdwara’s there.

A tradition has been set up that every year on the November 11 (Armistice Day 11 November 1918), hundreds of Sikhs come from throughout Europe to Ieper to take part in the Poppy parade and pay homage’s at Menon Gate, the national monument of World War-I in Belgium and at Hollebeke where a monument has been built by Belgium Government and inaugurated by ‘Panj Piare’ in memory of the Sikh soldiers to mark the celebration of peace on 2,3,4 of April 1999 dedicated to the 300 years of the birth of the Khalsa. Official invitations are being sent to Gurdwara’s of Belgium, Holland and France every year. Last year a delegation of Sikhs working for the British Police also visited this place. Free meal (Langer) is also served on this occasion.

Graves (Samaads) are visited by the families of these soldiers from Punjab, Europe, Canada, USA, and Great Britain. Since 1999, on May 4, the liberation day of Holland, a strong delegation of Sikhs also pays respect in Amsterdam at the National Monument of 2nd World War at Dam square.

As you must be aware, in March 2004 a law was passed in France that bans conspicuous religious symbols and attire in the classroom. Under this law, Sikh schoolchildren are banned from wearing the Sikh turban. The same people who fought for the freedom of mankind and the world including France have been denied their right of freedom. They all died or were wounded for the freedom of Britain and the world, and during shell fire, with no other protection but the turban, the symbol of their faith. A Sikh’s right to wear his articles of faith has been challenged in schools, the workplace, Prisons and other public places. Sikhs suffer increased harassment at airports because they wear the Turban. Sikhs can’t have their photos with Turban on the Driving license, Identity Card including French Passport. Is not a shame on part of the French Government? Our forefathers did not give their lives that their children should suffer. This is a great unjustice and Sikhs throughout the World, especially in France are fighting a legal battle.

On 31 May 2006 Sikhs Lobby MEPs Against Turban Ban in France in the EU Parliament. And the fact that we cannot and will not ever compromise our faith.

The Sikhs came forward and had helped the Europeans at the time of grave crisis of World War I and II and gave their lives in thousands and in return we the Sikhs are only asking the free World to come forward and give due respect to our community and to our symbols of faith. Only then the sacrifices of our great forefathers, given for the freedom of mankind, will be worthwhile.