MSS Kirtan Singh Khalsa presented a workshop on doing a deep dive (Veechar) into the 19th Pauree of Japji Sahib! This workshop was taught live on Zoom on May 21, 2022.

‘Veechaar’ in Gurmukhi is a word that is repeatedly used by the Gurus to describe both the act and the state of pondering deeply, reflecting and contemplating. Guru Nanak Dev Ji’s words in the 19th Pauree of Japji Sahib carry us from the outer reaches of time and space to inner experience of our own existence and the understanding of our destinies. It is said that the recitation of this Pauree and doing its veechaar (deep-diving into it) can bring us into a state of Vaak-Siddhi where one’s words, consciously spoken, can and do become our reality. Let’s come together and enjoy diving deep into Guru Nanak’s realm of understanding the magnificence, beauty and power of the Word. 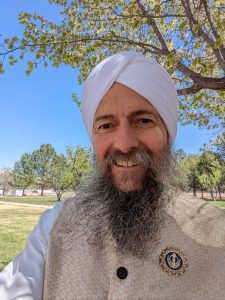 I was blessed to find the Guru in August of 1977 at the Golden Temple Conscious Cookery in Reno, Nevada where I was studying music at the University. After taking a few Kundalini Yoga classes I attended morning Sadhana at the local ashram which changed my life. Reading the Japji Sahib English translation while it was being read in Gurumukhi opened my mind and consciousness to the vast expanse of Guru Nanak’s universe and universal language of the soul. I fell in love.

I’ve been love crazy ever since, thanks to Guru’s protection, guidance and a lot of gentle to rough pushing, shoving and cajoling by the Siri Singh Sahib Ji (and the Guru) who entrusted me with serving Guru Ram Das Ashram in Los Angeles (where I moved in 1981) as the Secretary of Gurdwara beginning in 1985. I had the privilege for decades of being a part of the Siri Singh Sahib’s welcoming and hospitality team in Los Angeles which allowed me to meet and serve, along with my wife of 35 years Siri Bhrosa Kaur, countless of Siri Singh Sahib Ji’s and our Dharma’s guests from India and abroad.

My professional career has centered around sales and marketing and along the way I worked for a couple of our Golden Temple Restaurants, Golden Temple’s Food Brokerage Company SGN, Sunshine Oils and Yogi Tea.

I had the privilege of serving for more than ten years on the Sikh Dharma International Board of Directors, seven years as its Chair and served for six years on the Yogi Tea Board, including four years as the Chair.

I’m grateful to now be part of this great SDI team (since January, 2019) as COO and Funds Development Director and welcome all input, suggestions and ideas about how we may serve you and serve with you to continue to bring to the world this bounty of Sikh Dharma and the love of Guru that Siri Singh Sahib ji shared with us so passionately.