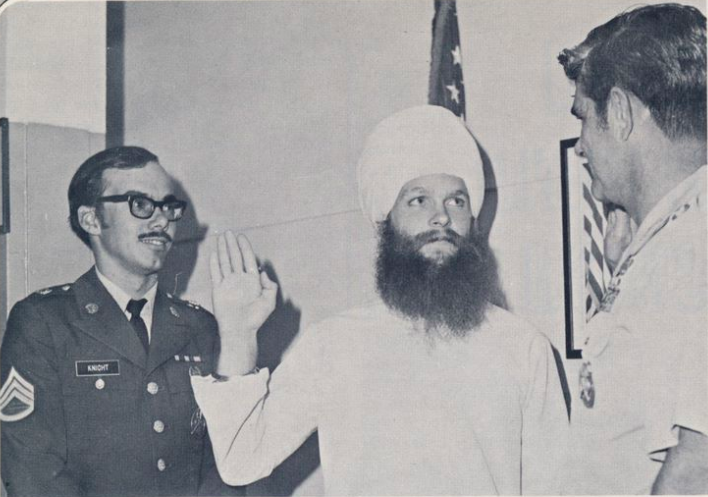 This is an article from a 1975 issue of Beads of Truth, written by Hari Nam Singh Elliot

The story of the first American Sikh enlisted in the U.S. Army who stood by the rights of the 1st Amendment to pave the way for Sikhs to practice their religious beliefs, including the wearing of beard and turban

Yes, there is a place for Sikhs in the United States Army. For this achievement, we can be grateful to those who went before us and who accepted the harassment and went through the Court Martials, who were forcibly shaven, but who ‘kept up’ in order to see that our basic human rights were upheld: the right to practice our chosen religion and to live actively in all aspects of society and the community without discrimination.

Their path was not an easy one, and they have done much in the name of Sikh Dharma. They are the ones who made my path possible, and I might add, quite easy.

I did have hassles, but fortunately, most of them were before I was actually in the Army. My first big problem was finding a Recruiter who didn’t think I was some kind of nut, and who would actually assist and not resist me. The next step was to appear in front of a Board to determine whether or not I was a bonafide member of the Sikh religion and then to recommend me for acceptance. The Board’s recommendation was negative, but fortunately the decision was not totally up to them.

Next, the case was sent to two other committees and finally, a month later, was given the stamp of approval by General Gard.

So now I was ready to enlist, or was I? Two days later, with suitcase in hand, I was on my way to the AFEES station (enlistment station) to join the U.S. Army, only to find that there was a group of officers and sergeants determined to block my enlistment. It seems that once I was accepted into the Army, I was authorized to wear the five K’s, but I was not necessarily eligible for enlistment. Their plan was to get a waver to block my enlistment and then through some technicality to keep me out for good.

After a day filled with urgent telephone calls to and from higher authorities, and many verbal battles between my Recruiter and the ‘opposition’, at 3:30 p.m. I was sworn in as a member of the United States Army.

That night I was on a bus to Fort Ord, California, where I was instructed in Basic Combat Training. From this point on, my relationship with the Army changed. During the first few weeks I received the Red Carpet Treatment: visits from Chaplains, hand-shakes from Drill Sergeants, apologies from Drill Sergeants for things they hadn’t even done yet, and special accommodations for meditation. I received absolutely no harassment from the Drill Sergeants or my fellow trainees. 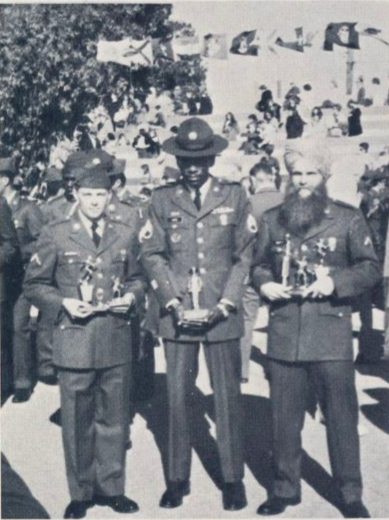 “When it was time to pass out honors for best recruit in the company, there was no problem in pointing out to visitors one winner: Private Hari Singh Elliot, 23. Elliot is the one in the red beard and olive drab turban. In addition to being the best shot and most physically fit soldier in his company, Elliot is also the first Sikh to enlist under a new Army regulation that permits members of this sect to wear their religious headdress. Elliot, who hopes to become an officer, said his only problem was fitting a gas mask over his head.” – Caption from a local Washington D.C. newspaper. 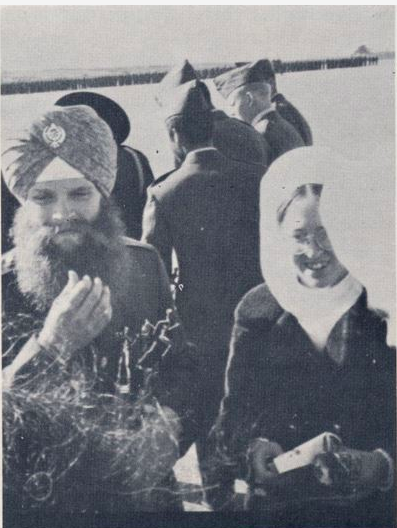 Hari Nam Singh and his wife.

I took to the Army’s way of life from the beginning: early to bed, early to rise, a highly disciplined attitude towards everything (with the hope of creating a sense of self-discipline in the individual) and lots of outdoor activities.

Everyone I have met in the Army has shown a great deal of curiosity and disbelief. I am constantly engaged in conversations such as the following:

Astounded Individual: “Hey man, how do you get to keep all this?’’ (He cups his hands around his chin…)

My reply: “ It’s a tenet of my religion, that I must keep my hairs.”

Astounded individual: “What religion is that?”

My reply: “Sikh Dharma.” (a little slower this time)

Astounded Individual: “I have never heard of that. What do you believe in?”

Astounded Individual: “What God is that?”

As the above conversation illustrates, there is a great deal of misunderstanding about our way of life, but as each conversation unfolds, there comes a greater understanding and this man in the turban and beard becomes a real person.

Everyone has shown respect for me and my right to live the life of a Sikh, though there is an element of fear that I may represent a threat to the ‘system’.

Each day is a fulfilling experience and I am most grateful to represent the Sikh Dharma. I pray for world peace, and that the light of God which opens the hearts of men, might prevail through all Sikhs of the True Guru, so that all men might find that peace within. May His Will prevail and His Name be ever on our lips. 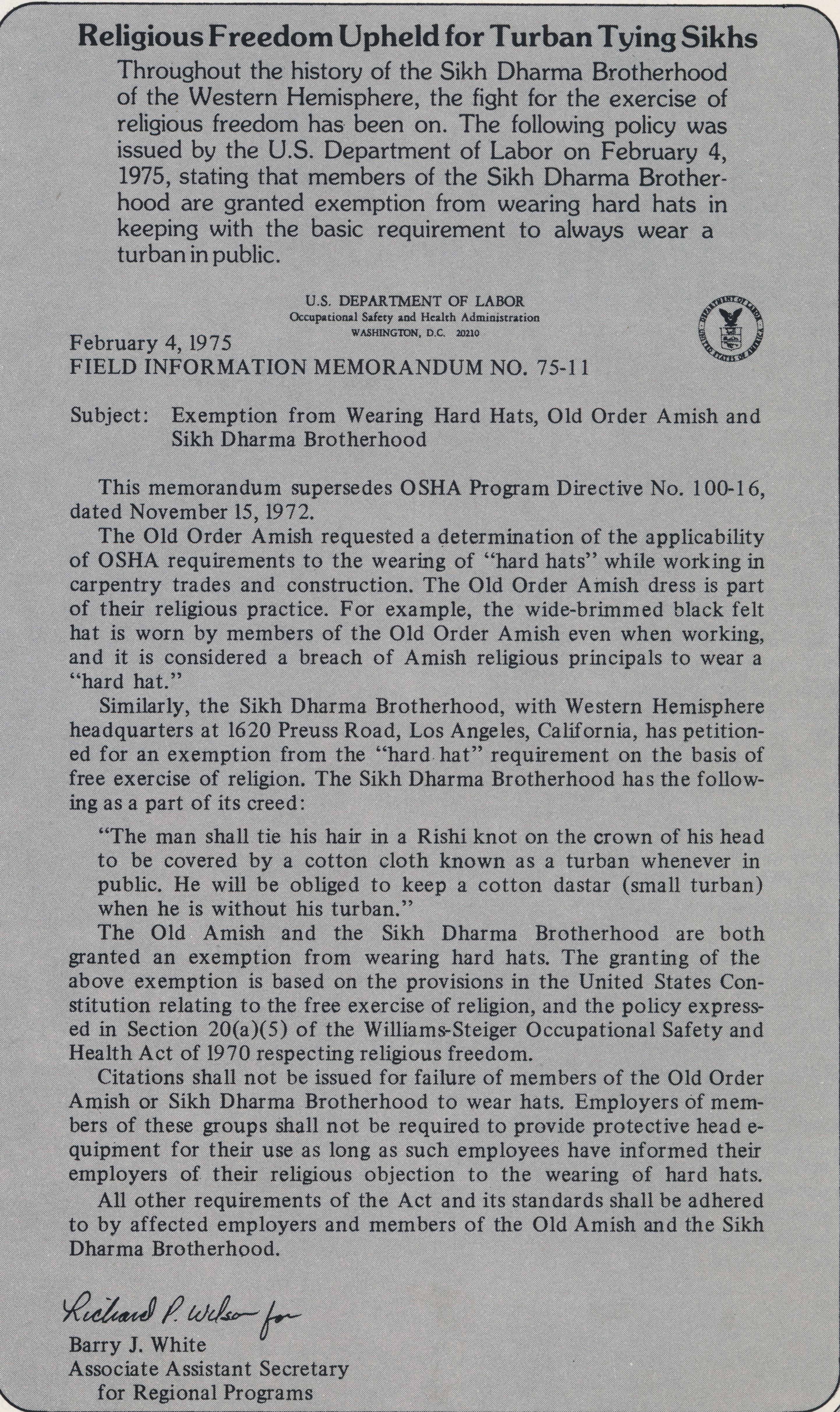