Below Snatam Kaur shares a beautiful story about the power of the Buddhist mantra “Om Mani Padme Hum”.  It is a wonderful lesson for us all!

There was once a boy named Yeshi, who lived in the high mountains of Tibet with his father. One day their horse disappeared. Given all of the important work around the farm, Yeshi was quite upset and ran to his father and said,

“Father, our horse is missing! We must go and find it!”

The father and son looked all day in the mountains and even some villagers joined in to help. With each step the father chanted a mantra (sacred chant) from the Buddhist tradition, Om Mani Padme Hung. Finally the sun set, and the villagers said to the pair as they returned,

“Oh such bad luck, you have lost your horse!”

Yeshi was quite upset, but the father had a peaceful expression.

“Our horse is missing. This is so terrible!”

Yeshi’s father replied, “Who can say what is good or bad? Give thanks for all.”

Then he chanted, “Om Mani Padme Hung, ” as he did his evening chores.

In a few days some villagers came knocking on the door, with smiling faces.

“You won’t believe it!” one of them said.

“Your horse is in the meadow, and it has a friend. Now you have two horses! It was good luck after all!”

The father and son went to the meadow, and indeed their horse had a beautiful companion, a pure white horse.

Yeshi was so excited, he burst out,

His father replied, “Who can say what is good or bad? Give thanks for all.” 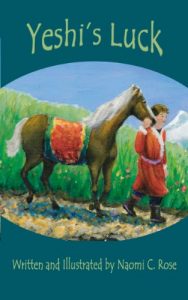 Yeshi enjoyed riding the new horse very much. After some training, one day he took it for a ride through the mountain meadows. But just as Yeshi was having the time of his life riding at such high speeds and feeling the wind on his face, the new white horse bucked him off! He flew through the air, and landed painfully on the ground. Fortunately some villagers had seen him and carried him back to his father’s house.

Yeshi’s father replied with a peaceful expression, as he took his son into his arms, “Who can say what is good or bad? Give thanks for all.” Yeshi rolled his eyes, and some of the villagers frowned.

Many days passed that Yeshi had to lie in his bed with a broken leg. He could do nothing else but listen to his father as he worked about the house. He was chanting “Om Mani Padme Hung,” and was filled with peace. Something in Yeshi began to melt.

One day, Yeshi awoke to the sound of villagers knocking on the door. Yeshi’s father opened the door, and the villager spoke frantically,

“Have you heard? The government is taking all of our sons to go and fight in a battle. You are blessed that Yeshi has broken his leg!”

Yeshi’s father replied, “Who can say what is good or bad? Give thanks for all.”

This time Yeshi just smiled, and he quietly chanted as his father had been doing.

In a few months time Yeshi’s leg healed. Soon after, a group villagers came running to their house crying,

“All of our boys are back! And they even brought new friends to join our village! ”

Yeshi and his father were outside tending to their garden and they both said,

“Who can say what is good or bad? Give thanks for all.” They then chanted the sacred mantra together.

The villagers smiled and joined in.

The power of mantra is incredible, whether it be from my tradition, your tradition, or any sacred tradition. I invite you to join us if you can for one of our upcoming events, to chant, heal, feel joy, and stay balanced within yourself through the ups and downs of life.

Please see this short video for the Dalai Lama’s translation of this mantra: click here.

This story is courtesy of Snatam Kaur’s blog