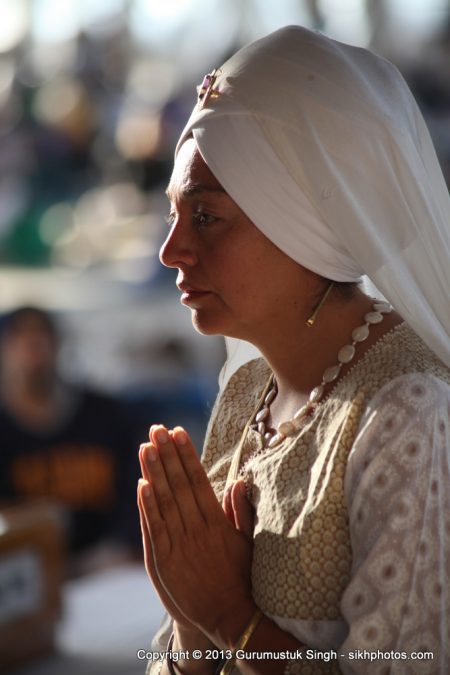 This article is courtesy of 3HO and written by Pritpal Kaur

One of the most powerful archetypes that Yogi Bhajan shared in his lectures was the Ashtabhuja.

The Ashtabhuja is the archetype of woman as Goddess. She represents warmth, heat, energy and her body shines with a radiance like the glowing sun. She has ashta – eight, bhuja – arms.

In her seven hands she holds powerful symbols: a bow and arrow representing wisdom and awareness; the lotus which is a symbol of the feminine; a discus which is like a water wheel when it empties and spills forward creation; a scepter which when thrown is like a lightening bolt to dispel negativity or adversity; and a jar of the divine nectar of life. Her eighth hand holds a mala or prayer beads that give eight Siddhis or spiritual powers and nine Nidhis or treasures.

“Blessed mother, the Ashtabhuja, the jananee, the divine, nursing and nurturing, the source of all affection, love and courage, the symbol of divinity, dignity and grace, reality among all non-realities, power among all impotence, and glow against all darkness. She has eight hands and rides on a Bengal Tiger.”
-Yogi Bhajan

I was always intrigued by this Goddess of the Universe. She spoke to me and I felt her power every time I even spoke her name.

Let her be alive within each woman. That became my prayer. I knew Yogi Bhajan was asking each woman not to worship the Ashtabhuja, but to embody her.

From where did this archetype come? What are her origins?

There is a Hindu myth in which a Demon prayed for years to have the power of immortality. Lord Brahma blessed him with this power and gave him the gift of immortality. He gained the power and then began to kill and destroy the world through dominance and control. He did not stop here but had a desire to have power over the Gods as well.

In order to combat this demon, the Gods created a beautiful embodiment of the feminine, the Mother Goddess. Each of the Gods gave her their most powerful weapon and placed it in one of her hands. She not only had the power of the Gods that she held in each of her hands, but she also rode on a tiger.

When she defeated the demon, an amazing change occurred. It is said that then there was peace on the Earth. The sky became bright with the light of the sun. The rivers flowed freely and those that inhabited the Earth danced and sang their sweet songs again. She made a promise to nourish the world with flourishing vegetation and she would protect and save those who worshipped her. Her power was magnificent.

“Exalt yourself. Excel. You are born to rule. That is the rule of the Creation. You are ashtabhuja bhagaute. You are the giver, the birth of all eight facets: four sides, the top, the bottom, time and space, eight. You always were, you always will be and that is the only way it is.”
-Yogi Bhajan

My prayer on this day and forever is that as women we may embody this divine being through out actions, words and thoughts. And let these words of Yogi Bhajan resound in our hearts and spirit as he exalts our true power as woman.

He described the attributes of the Ashtabhuja in this beautiful poem:

Woman: The Ashtabhuja
A poem by Yogi Bhajan

My woman is beautiful. She has eight hands. She walks on a tiger—regal, beautiful woman. I see her and I love her.

When I am with any woman, I like her to walk ahead of me. Because I learned from my woman, she walks ahead of me.

She is Ashtabhuja, the Goddess of the Universe, Conqueror of all, Most Powerful, Most Wonderful, Most Graceful, Most Infinite,

She who rides on the Maneater, in Majesty and Dignity, in such a splendid identity, the whole world feels it as a fresh breath of life.

Her very presence is the Totality of God’s Totality—She is Her Holiness. 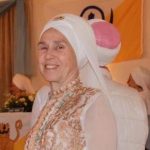 Pritpal Kaur is a KRI-certified Lead Teacher-Trainer. She studied at the feet of Yogi and Spiritual Master, Yogi Bhajan, for over 35 years and has dedicated much of her life to sharing the teachings of Yogi Bhajan and the 3HO Lifestyle around the world. Along with being a KRI Lead Trainer, she is also a Sat Nam Rasayan Yogic Healer, an E-RYT 500 with Yoga Alliance, Spiritual Life Coach and the creator of “Excel and Celebrate,” a transformational program for women. Pritpal currently serves as CEO of 3HO Foundation International. She lives in New Mexico with her husband, Pritpal Singh.