Simran is remembering of, or meditation on God’s Name. It is also prayer. “Simran” is the noun form of “simar,” which means to remember, to hold in remembrance, to meditate on.

The Gurmukhi word sounds the same as the English word “simmer.” When liquid boils and is then turned down to “simmer,” those little popping bubbles are the sign that the heat is high enough and steady enough to maintain the constant pulsing. 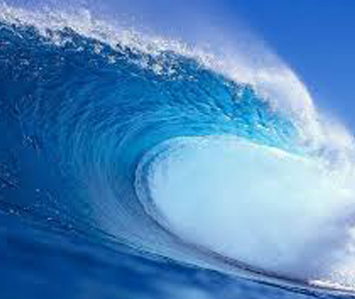 Doing Simran implies a seemingly effortless, almost automatic repetition of the Name. It is like “riding the wave” with ease, after you’ve finished paddling mightily to get out far enough in the ocean to catch it (in other words, you made the effort to meditate because of your desire and/or discipline).

Although you might not be feeling it, you have a “remembrance” of the flow and the ecstasy and you willingly, or even sometimes against your will, bring yourself to the place where you remember that the flow happened and will happen again.

Simran begins on the shore of the ocean, with the first touch of the water on your big toe that invites you with its transforming touch to continue into the surf ever deeper, deeper until you are fully immersed and you can relax in the embrace of the ocean holding you, carrying you.

Simran begins with the smallest touch of remembrance, dissolving any fears or obstacles of the mind, and continues ever deeper, into the realms of consciousness until there is only the One, and you are merged in Oneness.

Sometimes life comes with great difficulties and challenges that seem to be impossible to overcome—like the huge and crashing waves and monstrous storms of life. Our Tenth Master, Guru Gobind Singh ji, exemplifies such a life. He was a poet, a scholar, a compassionate lover of God/Goddess and he was called to war in defense of his Sikhs and all humanity on the very real physical plane of the battlefield.

His training of lifetimes prepared him to go through his life, relying through it all on the constant repetition of the names and aspects of God, which he also shared with his soldier/companions.

He left his incomparable Bani as a legacy, which, when repeated, connects the reciter to the Guru’s ecstatic consciousness, from which it originated.

In the best of times, in the worst of times—as a hero, as a failure, in victory, in defeat— the measure of victory is not according to the assessment of others, but rather the extent of the training of the mind and psyche to remain connected to God in all the circumstances. This is the nature and the gift of Simran.

In remembrance, and in forgetting, God lives equally. If we don’t see it, it doesn’t mean it’s not there. Simran creates the stillness and then the opportunity to expand beyond the limited self into connection with the Divine Self, in which we are One.

When the state of consciousness reaches simran then you do not need to do anything; God follows you. At that stage the Almighty, the Infinite, the Omniscient, the Omnipotent God, the Something which you are so proud of, and which you talk about and you perceive about and scriptures talk about and saints and sages sing about, that entire Universal Power is totally looking towards the teeny, tiny individual. That is simran for which Guru Arjan sang:

(To the one who meditates on Him there comes a perfect peace, And all pain and sorrows depart.)

What he said speaks volumes and speaks for itself, and holds the inspiration to train your mind to awareness and presence of God. 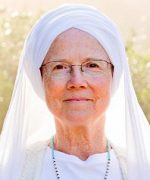 SS Prabhu Nam Kaur has been an ordained Sikh Dharma Minister since 1975. She is a singer of Gurbani Kirtan and a teacher of Kundalini Yoga and Naad Yoga (sound current). She and her husband, Sat Santokh Singh, are parents to six children and they are also grandparents.