Recognizing the need to educate women about women, Siri Singh Sahib, Yogi Bhajan created a special summer intensive training program for women which took place in Española, NM, USA and continued for twenty years.   Starting in 1976, he spent up to 8 weeks every year directly teaching women at what was called “Khalsa Women’s Training Camp” (KWTC).  The first KWTC was held in 1976.

He also taught men’s courses, but they were much less often and much shorter. Yogi Bhajan explained that women are far more complex (and powerful!) than men, so in the long run, men would benefit more if there was a greater focus on teaching women how to be radiant, strong, and effective.

KWTC included everything from martial arts and marching, to music and meditation. Yogi Bhajan personally lectured and led Kundalini Yoga classes every day. He was determined to elevate and transform women from “chicks” to eagles, emphasizing the nobility, strength, and grace of women. He taught special meditations for women and shared ancient secrets on health and diet for women. He lectured on virtually every aspect of a woman’s life including love, romance (versus reality), marriage and child raising, always building their self-esteem and teaching about the divine nature of women.

“I designed this camp to give women a standard of security, grace, and purity of thought… It is not a yoga camp. It is not a meditation camp. It is a woman-in-training camp. It is totally to train the whole sum of the woman, not just one part of her…This camp is not designed to create yogis. Our purpose is that you should [learn to] confront the world as a saint, but live as a soldier in your readiness.”

One of the most striking things about Yogi Bhajan’s perspective on women is the place of respect and reverence he says is woman’s God-given right, and his insistence upon the nobility and invincibility of woman when she claims her rightful power and majesty as Shakti, the feminine aspect of God, the power through which creation was created.

He said that the Aquarian Age would not manifest until all women were respected around the world. These teachings are the seed to the transformation necessary for all women everywhere.

View lectures by Siri Singh Sahib, Yogi Bhajan, which focus on his teachings about women

In these teachings he is speaking to his most dedicated students, a close knit community, and he is very personal, pointed, and direct.  He delivered what women needed to know about themselves – and about men – in order to be graceful and successful in their work, their relationships and their families. 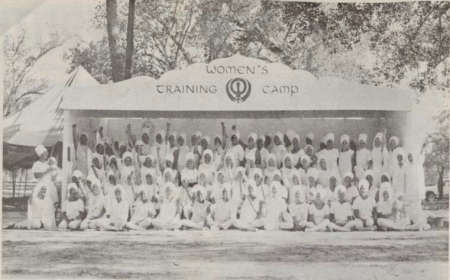 Excerpts from a lecture by Siri Singh Sahib, Yogi Bhajan on June 27, 1976:

Come join us at Women’s Camp to realize and remember your true value as a woman…At Women’s Camp, we are asking you to look at yourself, patch up what is torn apart, leave what is excessive, and fill in the gaps. You can do it. The idea is that all of you who believe in one reality, one thought, who have one goal to achieve and a common spirit to live righteously, should get together and help each other create a new energy. The energy should build up character one by one, micro-consciousness and macro-consciousness. That is what our future is based upon.

Women’s Camp is totally for your positive development. There is no silence. You can talk to everyone, befriend everyone. Here we want to build a family of equals who are honest, disciplined, virtuous, can give up negativity and share their positive qualities. The first fundamental criteria for this camp is to offer an open and honest invitation for you to become what you want to become, to have the chance to overcome your difficulties, and improve your capability to handle time and space.

A spiritual person learns and disciplines herself to use the positive mind, and the unspiritual person lives by the negative mind. Both powers are there, don’t misunderstand. Women’s Camp is to build in you the positive character of a woman, so that you do not act for profit and loss, because grace cannot be purchased or sold. Any human being who has a price is a commodity.

The purpose of Women’s Camp is to create one intelligent, honest, creative woman who can discipline herself through every thick and thin of life; who can kill her own negativity and thus give birth to a positive child. Everything I do is based on this one thing only. Your future generations, your children are the by-product of your mind and only your mind. They learn by watching you. Many of you are unfulfilled. You are unfulfilled as children and you experience that gap in adulthood. A fool picks up the goodness of the past and the devil picks up the evilness of past days; both are picking up negativity. An angel picks up goodness of today and lives with it.