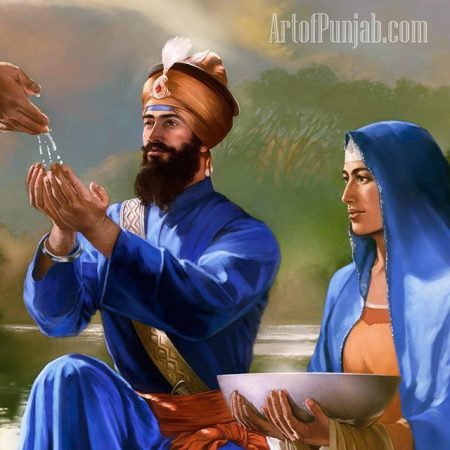 Renowned Canadian artist – Kanwar Singh, the painter/chronicler of Sikh History, painted this image, “Guru Gobind Singh: Master and Disciple.”  It depicts a scene from the seminal event in Sikh history: the First Vaisakhi of 1699 and the Creation of The Khalsa.

In the scene thus captured, we witness as follows: Having just blessed the First Punj Pyarey with Amrit and transformed them into the first five Khalsa in history, the Guru then positions himself before the Five in bir aasan (the warrior’s pose) and asks the Khalsa to bless him  with the gift of Amrit as well and initiate him into the Khalsa. With him is Mata Sahib Kaur, holding the sarab loh baata of Amrit.

“This famous scene,” explains Kanwar Singh, “has been depicted by other artists. So I was interested in creating more than a mere representation of an integral event in Sikh history. I wanted to convey the most inspiring aspect of this momentous scene, the Guru bowing before the newly ordained Punj Pyarey and asking for inclusion in the Khalsa. It is one of the most remarkable and memorable lessons in humility which our Gurus have shown us by example, time and again, to be the very essence of Sikhism.”

The History Behind the Painting

Guru Gobind Singh ji, the 10th Guru of the Sikhs, was born into this world to protect the righteous saints and to stand against evil tyranny.  Under the oppressive mughal rule of 17th century India, the Sikhs alone remained as a wellspring of freedom and equality.   To maintain their freedom and to fulfill their destiny, Guru Gobind Singh knew that the farmers and merchants of Punjab needed to be forged into strong and fearless warriors.

In the spring of 1699, Guru Gobind Singh sent a hukamnama to his Sikhs, penned by his own hand, instructing them to come to Anandpur Sahib for the Baisakhi spring celebration.  More than eighty thousand people arrived at Anandpur Sahib, cherishing the Guru’s personal invitation.

Unlike any event that had gone before, Guru Gobind Singh strode out alone from the folds of a tent. He was powerful in his appearance, dressed in beautiful clothes with a mighty sword hanging at his waist.   The fire of battle, Bir Ras, charged his every movement.  Unsheathing his sword and raising it to the sky, he called out “My sword is thirsty.  I want the head of a Sikh!”

Nothing could be heard over the vast crowd, but the clanging of the horses as they shifted nervously on the side.  Leaning forward and searching face to face, the Guru boomed in an unforgiving voice.  “I need a head! Who is willing to satisfy the calling of my sword!  I need one person who will give his life to me!”

The Sikhs stood shocked and could not believe what was unfolding before them.

But Daya Ram, a shopkeeper from Lahore, moved purposely to the stage.  Guru Gobind Singh took him by the arm, and with a fierce glance over his shoulder, he led him into the tent.  Moments later, the Guru strode back before the crowd with his sword dripping with crimson blood shouting, “I need a head!  I need the head of a Sikh!”

Those in the front rows look at each other and whispered frantically, pushing with their backs into the crowd.  Some thought the Guru had gone mad, and they ran away in fear for their lives.  Some hastened to the Guru’s mother, begging her to intercede on their behalf.  One by one, four more Sikhs – Dharm Das, Mokhan Chand, Sahib Chand and Himmat Rai –came forward to offer their lives to Guru Gobind Singh. Each time the Guru returned alone, asking for the head of another Sikh!  After the fifth Sikh disappeared into the tent, a hushed silence fell over the crowd who waited with emotional anticipation.

This time, the Guru took a little longer in returning from the tent and when he emerged, he walked slowly and calmly with a bearing of mastery.  Behind him walked Panj Piare, the five beloved ones, dressed in beautiful clothes of gold threads and resplendent turbans.  Their faces glowed, radiating the light of the Guru himself.

With all faces turned towards him, the Guru then spoke to the crowd.  “These five beloved Sikhs are the Khalsa.  Through the supreme test faith, even at the risk of their life, they have become pure.  You who are present here, and you who come in all the ages to follow, I call you to join the brotherhood of the Khalsa. Through the purity of the Khalsa, the world shall be free and the grip of the tyrants shall be broken.”  The crowd rose to their feet in cries of joy and victory.

Taking a bowl of iron filled with pure water, the Guru knelt and stirred the water with a double-edge sword.  Mata Jeeto ji, Guru Gobind Singh’s wife, came forward with cakes of sugar wrapped in her chuni.  Mataji put the sugar into the water, adding sweetness to the power of the steel. By adding the sugar to the water, the Guru showed to his Sikhs that strength must always be accompanied by depth and sensitivity.

The five beloved ones drank this Amrit from the Guru’s hands, uttering the new greeting of the Khalsa brotherhood, Waheguru ji ka Khalsa! Waheguru ji ki fateh!  “The Khalsa belongs to God, Victory belongs to God”.  Then, to the amazement of the crowd, the Guru himself knelt before the five Piare and asked them to initiate him also into the Khalsa.