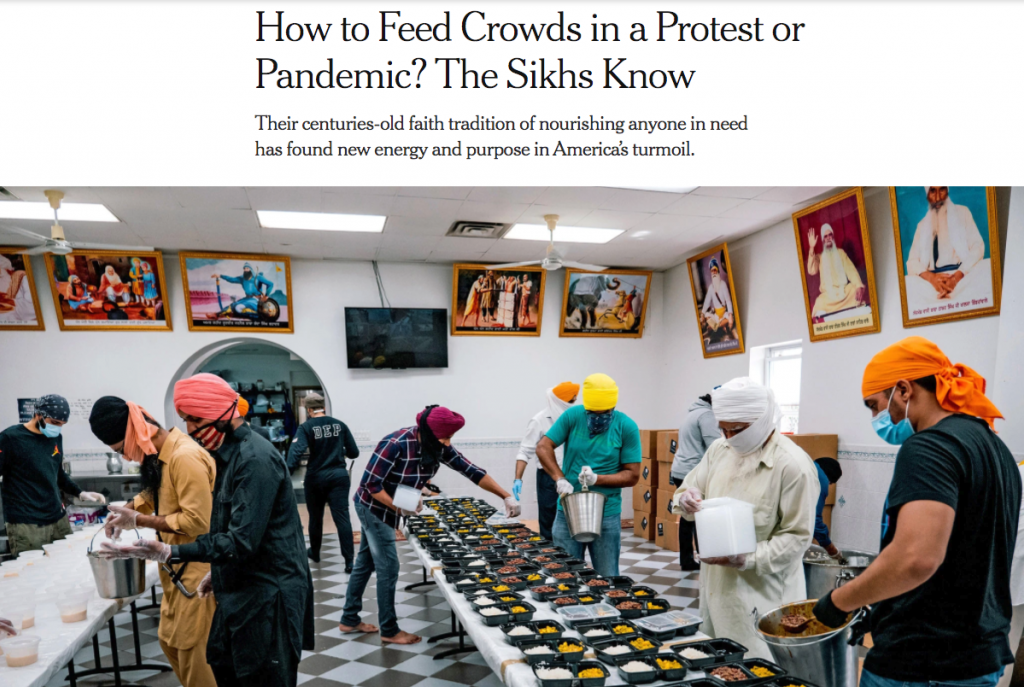 The New York Times published an inspiring article titled “How to Feed Crowds in a Protest or Pandemic? The Sikhs Know” by Priya Krishna on June 8, 2020. Please find the text of the article below. We draw so much inspiration from all of the amazing Gurdwaras and Sangats featured!

Read the article from the New York Times Here

Inside a low, brick-red building in Queens Village, a group of about 30 cooks has made and served more than 145,000 free meals in just 10 weeks. They arrive at 4 a.m. three days a week to methodically assemble vast quantities of basmati rice, dal, beans and vibrantly flavored sabzis for New York City hospital workers, people in poverty and anyone else in search of a hot meal.

This isn’t a soup kitchen or a food bank. It’s a gurdwara, the place of worship for Sikhs, members of the fifth-largest organized religion in the world, with about 25 million adherents. Providing for people in need is built into their faith.

An essential part of Sikhism is langar, the practice of preparing and serving a free meal to promote the Sikh tenet of seva, or selfless service. Anyone, Sikh or not, can visit a gurdwara and partake in langar, with the biggest ones — like the Golden Temple in Amritsar, India — serving more than 100,000 people every day.

Since the coronavirus pandemic has halted religious gatherings in most of the country, including langar, gurdwaras like the Sikh Center of New York, in Queens Village, are mobilizing their large-scale cooking resources to meet the skyrocketing need for food aid outside their places of worship.

Some are feeding the protesters marching in outrage over the killings of George Floyd and other black Americans by the police. Last week, a dozen or so volunteers from the Queens center served 500 portions of matar paneer, rice and rajma, a creamy, comforting dish of red beans stewed with tomatoes, and 1,000 bottles of water and cans of soda to demonstrators in Sunnyside. They also offered dessert: kheer, a sweetened rice pudding.

“Where we see peaceful protest, we are going,” said Himmat Singh, a coordinator at the World Sikh Parliament, an advocacy group providing volunteers for the Queens Village efforts. “We are looking for justice. We support this.”

Since the pandemic began, soup kitchens have had difficulty keeping up with demand. Shuttered schools and even fine-dining restaurants are using their kitchens to prepare and serve hot meals. But few other places are as well positioned to handle the sheer scale of assistance required right now as the gurdwaras. Most have large, well-equipped kitchens, a steady stream of volunteers and no shortage of ingredients, thanks to regular donations from community members.

During the last annual Sikh Day Parade in New York, in April 2019, the Queens Village kitchen — which has a walk-in cooler, multiple freezers, 50-liter stockpots and a huge grill that can cook dozens of rotis at once — produced 15,000 meals in a single day.

The Sikhs’ biggest challenge isn’t keeping up with demand. It’s letting people know that they’re here — without making a big show of it or proselytizing, which is forbidden.

Founded in the 15th century in Punjab, India, by the spiritual leader Guru Nanak, Sikhism has an estimated 500,000 followers in the United States and 280 gurdwaras, according to the Sikh Coalition, a civil-rights organization in New York City. One of the most visibly distinctive features of the Sikh practice is the turban — a symbol of the religion’s belief in equality — though not everyone chooses to wear one.

Sikhs in America have been often been prey to bigotry, hate crimes and Islamophobia, particularly since 9/11. A few volunteers said in interviews that before going out to distribute meals, they worried that they might hear ignorant comments. But Santokh Dillon, the president of the Guru Nanak Mission Society of Atlanta, said the people he serves are often more puzzled than prejudiced. Most have never even heard of Sikhism, he said.

When some find out that the meals are free, “They look at us and say, ‘You are kidding, right?’ ”

At least 80 gurdwaras in the United States are now providing food assistance. For many, the transition has been quick and seamless.

This is not just because the infrastructure is already there, said Satjeet Kaur, the executive director of the Sikh Coalition. “The call to action and the responsibility” for helping others is deeply entrenched in the Sikh way of life. Sikhs are expected to donate at least 10 percent of their time or income toward community service.

It took the Gurdwara Sahib of Fremont, Calif., just a few days after suspending religious services in March to set up a meal and grocery delivery program, and a drive-through meal pickup system outside the gurdwara.

Cooks wear gloves and masks, and the kitchen is big enough for workers to stand more than six feet from one another. As at most gurdwaras, the menu changes regularly, but is typically Indian and always vegetarian. (Meat is not permitted in gurdwaras.)

While these Sikh volunteers, known as sevadars, are experts in mass-meal preparation, they aren’t as accustomed to spreading the word. The Fremont kitchen has produced 15,000 to 20,000 meals a day on holidays like New Year’s Eve, said Dr. Pritpal Singh, a member of the gurdwara. But now, the gurdwara is serving just 100 to 150 people each day.

Dr. Singh said he hoped that more people in need would come pick up food. “We could do hundreds of thousands of meals if given the task,” he said.

But with the demonstrations unfolding around the country, Sikhs aren’t waiting for people to come to them any longer. On Tuesday, volunteers from the Gurdwara Sahib attended a protest in Fremont and handed out several hundred bottles of water as a show of solidarity.

On a recent Friday, Gurjiv Kaur and Kiren Singh asked the volunteers at their gurdwara, the Khalsa Care Foundation, in the Pacoima neighborhood of Los Angeles, to prepare meals in the community kitchen that they could take to the protest. The next morning, they and others picked up about 700 containers of pasta with a garlic- and onion-laden tomato sauce and 500 bottles of water from the gurdwara, and set up a tent in Pan Pacific Park. Soon, protesters started arriving at the tent with other donations, like medical supplies, snacks and hand sanitizer.

“It is our duty to stand up with others to fight for justice,” said Ms. Kaur, a graduating senior at the University of California, Irvine. “Langar at its core is a revolution — against inequality and the caste system,” the antiquated hereditary class structure in South Asia, which Sikhism has always rejected.

In Norwich, Conn., volunteers from five gurdwaras handed out a few hundred bottles of water to protesters last Tuesday, and on Friday, distributed as many containers of rajma, or kidney beans, and rice on a Main Street sidewalk, a block from City Hall.

Swaranjit Singh Khalsa, a volunteer and a member of the Norwich Board of Education, noted that historically, many Sikhs in India have been killed by the police while fighting for their civil rights.

At many gurdwaras in the United States, most of those who show up for langar meals are Sikhs. Now that they are catering to a broader population, menus have changed to suit different tastes. In the Seattle area, volunteers at the Gurudwara Sacha Marag Sahib are making pasta and tacos in addition to rice and dal. 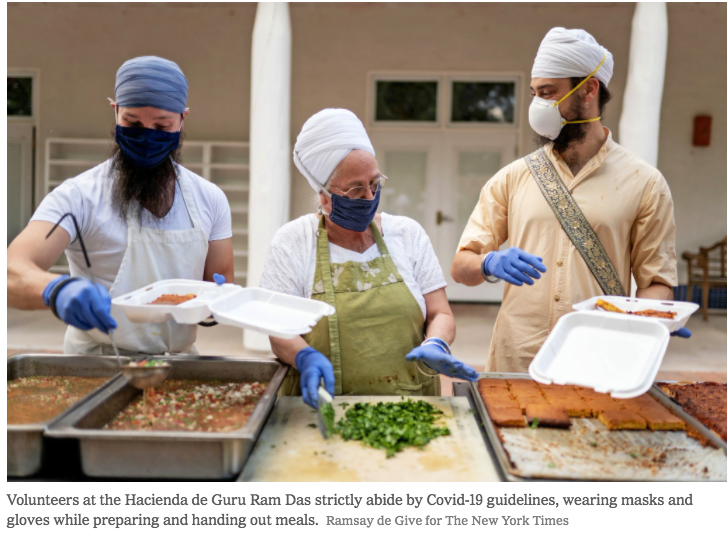 At the Hacienda de Guru Ram Das in Española, N.M., meals have included enchiladas and burritos. Still, Harimandir Khalsa, a volunteer, said the community kitchen is operating at less than 10 percent of its capacity.

“I think it is about convenience,” Mr. Khalsa said, as the gurdwara isn’t centrally located. “If we had a food truck parked in front of Walmart that said, ‘Free food,’ we could get more takers. But for people to get in their cars and drive over to this place — people aren’t that desperate yet.”

Location is also an issue for the Guru Ramdas Gurdwara Sahib in Vancouver, Wash., as the neighborhood doesn’t have much foot traffic, said Mohan Grewal, the gurdwara secretary. So every other Sunday, volunteers pack up 300 to 400 meals made in the gurdwara and drive them to the Living Hope Church, a Christian congregation six miles away, in a more urban part of the city.

One of the biggest challenges for gurdwaras is that many hospitals, shelters and other charitable organizations they’d like to help don’t take cooked food because of hygienic concerns, or accept it only if it meets certain health codes. Many Sikhs have started collecting and distributing pantry items in addition to making meals.

Still, some gurdwaras are bustling. In Riverside, Calif., a hub for the Sikh population, volunteers from the United Sikh Mission, an American nonprofit aid group, and the Khalsa School Riverside, a children’s program, serve 3,000 to 5,000 meals every day at the Riverside Gurdwara. People line up in the drive-through as early as 9:30 a.m., even though it doesn’t open until 11:30.

The process is highly systematized. The cooking team shows up at 5:30 a.m. to prepare meals based on previous days’ numbers, as well as requests from senior centers, hospitals and nursing homes; another team packs the meals into microwave-safe boxes; and the third distributes them at the drive-through and other locations. The gurdwara shares information about the free meals through regular posts on large Facebook groups for local residents.

“We didn’t just sit there and say we are going to cook and wait for people to come,” said Gurpreet Singh, a volunteer for the United Sikh Mission.

Since the protests, Mr. Singh and others have been reaching out to black organizations, like churches, offering to drop off meals or groceries. They expect to see an increase in people showing up for meals, as thousands have been attending protests in the area.

Groups like United Sikhs, an international nonprofit, are helping to get the word out. They have stepped up efforts to identify areas of need, connect gurdwaras with organizations seeking assistance, provide best practices for food preparation during the pandemic and mobilize Sikhs to help feed protesters.

While the pandemic continues, a few gurdwaras aren’t using their kitchens. Tejkiran Singh, a spokesman for the Singh Sabha of Michigan, west of Detroit, said the gurdwara committee decided it was too risky to start a meal distribution service, especially since Michigan has become a hot spot for the coronavirus.

When the Sikh Society of Central Florida, in Oviedo, reopens on June 14, services will be limited to fewer people, and food will be handed out in to-go containers as they leave.

But Amit Pal Singh and Charanjit Singh, the chairman and the treasurer of the Sikh Society of Central Florida, also want to continue the drive-through and delivery services they developed during the pandemic.

“The concept of langar is to serve the needy,” Mr. Pal Singh said. Before the pandemic, he said, most people participating in langar were local Sikhs coming more for social and religious reasons than out of need. The drive-through and deliveries will allow them to put meals into the hands of people who struggle to afford to eat.

That will mean a lot of extra food for volunteers to prepare, in a city where the Sikh population is still small. But none of that seemed to worry Mr. Pal Singh.

“We would love to be in that situation,” he said, his optimism vibrating through the phone. “We will handle it.”

Editor’s note:  Hacienda de Guru Ram Das in Espanola, New Mexico, was honored to be included in this communication.  We are blessed to be one of so many beautiful Sikh communities around the globe doing this inspiring service.  Wahe Guru!