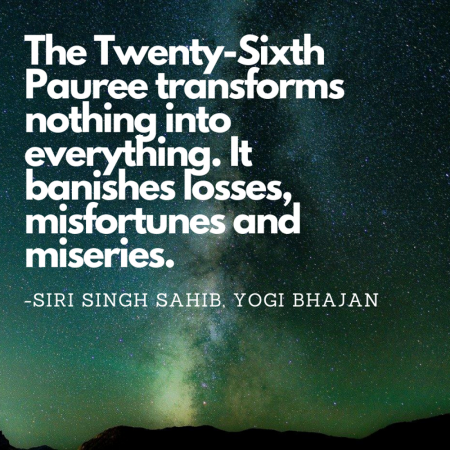 “The twenty-sixth Paurī transforms nothing into everything. In your business it banishes losses, misfortunes, and miseries.”

Reflections on the 26th Pauri from S.S. Pritpal Singh Khalsa

Gurū Nānak begins this Paurī by using the word, amul, to describe God as priceless. To be priceless is to be beyond any possible price – to have value that exceeds any price. As God is infinite there is no way to assign a value or a measure of that vastness. Even science admits that we live in a constantly expanding and changing universe where whatever size the universe may be now, in the next instant it is already greater and different.

When we deal with the mundane part of the universe, maya, we always compare the value or measure of one thing with the value or measure of another. In this way we can exchange one thing for another. This can generally make us blind to those aspects of life that cannot be measured, like Love, Spirit or Grace. The mind measures; the heart accepts. Although God is in all things, God-consciousness cannot be easily found in maya. God is un-measurable, unknown. Therefore, there is no exchange of things that we can offer to gain the vastness of God.

Even the people who are God’s vāpārī, or dealers, are priceless. Spiritual teachers, spiritual leaders, yogis and mystics are among these dealers. Our fellow travelers on the spiritual path are also priceless. Sitting in the Sādh Sangat or gathering of the saints (bhanḏār), we are often touched by how precious a gift it is to have the blessing of the support of dedicated souls around us – that we are surrounded by angelic beings who hold the same spiritual values and intention. It is also the place in which we gather, the dībāṉ, or court of the Gurū, which is also priceless. The bricks and mortar are only the physical container but they hold the precious energy field of the gathering of saints.

Sikhs have a tradition to avoid veneration of any image or idol. But here Gurū Nānak says that even the nīsāṉ or symbol of God is priceless. The symbol itself could be anything but because it directs our mind to remember God, it too takes on the same preciousness. It is this thought that inspires people to handle even the written words of the Guru with utmost respect.

The one thing that we can “pay” toward our debt from receiving these priceless gifts is to “spend” time repeating the Nām, or “Jap.” Gurū Nānak says ākhaṉ or to speak. Which in this context can mean to chant or sing the mantras and Bāṉī of our Gurū. Even though Gurū Nānak tells us that speaking alone cannot express the fullness of God, he suggests that what better way to spend our energy than to repeat the Names of God.

Throughout all human history mystic scholars have spoken in the effort to describe God – the Vedas, the Puranas, etc. The demi-gods have also spoken – Brahma, Indra and Shiva. Buddha, other saints and sages, spiritual warriors and divine beings have all spoken. They have all come and gone and none of them have succeeded in capturing the fullness of the Infinite God.

Scientists estimate that there have been 108 billion people who have lived on the Earth since Man first appeared here. Gurū Nānak says that even if you double that number, there still would not be enough voices talking to express the vastness of God. He says that anyone who would try to make the claim that they can fully describe God, that person is the gāvārā gāvār, the fool of fools.

When you embrace the concept of the pricelessness of the Unknown, then your sense of gratitude expands and what looked like worth nothing, becomes precious. Thus we can understand what Yogi Bhajan says about the effects of this Paurī, that it “transforms nothing into everything. In your business, it banishes losses, misfortunes, and miseries”. (1) 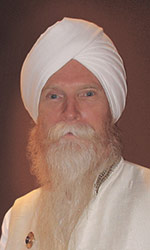 Pritpal Singh Khalsa is a Sikh Dharma minister and represents Sikh Dharma International (SDI) as the Director of Dharmic Education. Pritpal Singh has been a student of Yogi Bhajan since 1972. Pritpal is a sacred-music musician and has released several recordings and has performed around the world. He is also a KRI-certified Lead Teacher Trainer, actively training Kundalini Yoga teachers around the world. Pritpal assists people through his Yogic Life Coaching practice and presents workshops on various topics such as; Meditating on Purpose, Conscious Relationships, Sacred Sound and the Accessing the Conscious Masculine. For further information: www.pritpalsingh.com.