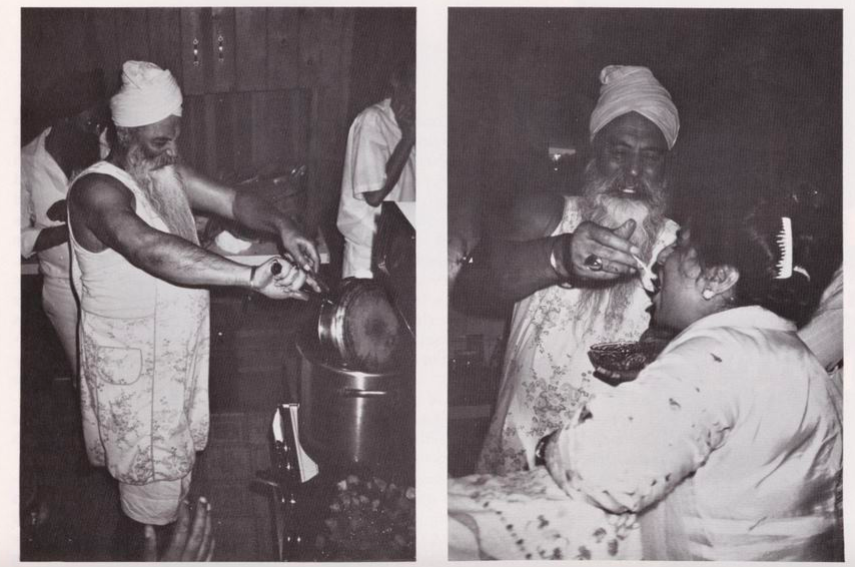 The history of our 3HO family is recorded in our songs, but many of the memories of our nation are tied to our taste buds!

In 1969, the Siri Singh Sahib‘s presence permeated every aspect of our evolving lifestyle and his touch with food and the concept of healthy, conscious, vegetarian eating was a welcome antidote to people raised on too much of everything America had to offer.

In 1969, in Los Angeles, his first yoga classes attracted a cross section of people including a few Hollywood actors and actresses, a few so-called yogi and swami “groupies,” and all the hippies. It was then the Siri Singh Sahib gave one of his first diets, “to separate the yogis from the bogis.”

Thus began a long association with garlic, the most potent member of the root trinity of onion, garlic and ginger. The fast consisted of 3 cloves of garlic, eaten 3 times per day for 3 days, with lots of water! This diet was an amazing experience. It detoxifies the entire intestinal tract, and lungs, builds the immune system and increases the body’s innate healing forces. It will also let you know who your real friends are! This diet worked in the 1969 yoga classes too; the yogis stayed and the bogis started looking for a less Saturn teacher.

3HO’s love affair with food had begun. The Siri Singh Sahib loved to cook and to work his special yogic magic in the kitchen. He also loved to serve and feed people his creations; each one uniquely delightful and capable of enrapturing your visual, olfactory and oral senses.

My first Solstice was summer 1971 in Paonia, Colorado, and it was the second 3HO Summer Solstice. We were on a beautiful farm where all the food was grown organically. The Siri Singh Sahib cooked our first meal and I was fortunate enough to stand by his side at the fire pit and hand him spices as he created “Gilly Gilly Chili Chili.” This meal was served with mung beans and rice.

“Gilly Gilly Chili Chili” was very hot. It made you sweat, it got you high, it cleaned you out and sent you rushing back for seconds. I was hooked! The next day I was back at the fire pit again, this time cooking and stirring the wok myself. During the next eighteen years I tried never to miss an opportunity to cook with the Siri Singh Sahib and learn at his side. I have never seen him repeat himself!

Yogic cooking uses the basic ingredients of onions, garlic, ginger, all variety of spices and herbs and the entire vegetable kingdom. The creative possibilities are endless. Several cookbooks have been written over the years that capture the variety of tasty, healthy main courses, drinks and desserts that have been recorded and developed from the Siri Singh Sahib’s teachings, his inspiration and his personal food favorites.

These cookbooks are: Conscious Cookery by Siri Ved Kaur Khalsa, The Golden Temple Vegetarian Cookbook by Yogi Bhajan, A Taste of India and The Millet Diet by Bibiji Inderjit Kaur, The Espanola Ultimate Diet by Sat Simran Kaur Khalsa and Gurujeet Kaur Khalsa, Foods For Health & Healing based on the teachings of Yogi Bhajan, and Healthy, Happy, and Hungry recipes that were collected and published by the northeastern region of 3HO.

Take lots of onions sliced thin and spread in a thick layer of rings on a cookie sheet, spiced with basil, salt & pepper and red chili flakes and covered with cheese and baked for 30 minutes at 350 degrees, and then broiled ’til golden.

Try garlic sautéed with lots of chopped parsley in olive oil and mixed with your favorite pasta; or steamed whole cloves (unpeeled) then squished out of their natural peels onto toast or rice crackers; or garlic kheer:

Cook 2 cups of rice in 4 cups of water. In a separate pot, heat 4 quarts of milk with 1 bulb of garlic (peeled whole cloves, crushed). Add seeds from 3 cardamom pods to simmer. When garlic is soft, add  cooked rice. Simmer together until thick, about 30 minutes to 1 hour. Stir often. Add 1/2 cup pistachio nuts and 1/2 cup blanched almonds. Season with salt, pepper, and Braggs.

Try lots of ginger grated and sauteed lightly in a little sesame oil and heaped on toast or ginger juice mixed in fresh orange juice, ginger sliced and boiled for tea or pickled ginger (available in oriental food stores) added to your favorite salad dressing or vegetable dip. Experiment yourself with the trinity roots, your food will be tastier and your body healthier for your efforts.

Delicious food eaten in a cozy communal setting was such a powerful force in 3HO that the first businesses that blossomed with the growth of ashram communities around the country were restaurants. Many hundreds of people did their first karma yoga in Golden Temple or Hanuman Conscious Cookeries. Thousands of people were introduced to the joys of the 3H0 lifestyle with their first bowl of mung beans and rice or their first cup of Yogi Tea.

In 1989, as we cross our twentieth year anniversary some of our most successful businesses are in manufacturing, marketing and sales related to the health food industry. A few glowing examples are Sunshine Oils, Golden Temple Granola, Kettle Chips, Yogi Tea, The Golden Temple Bakery, Yogic Herbs, and Nanak’s Cookies. The Golden Temple Health Food Stores in Baltimore, Maryland, and Birmingham, Alabama are exemplary of the high standards of excellence and commitment to quality, organization and pure food ethics that Sikhs have brought to the health food industry.

In the marketing area the Community Business Bureau (CBB) has established a reputation as one of the best brokerage houses in the health food field with Sikhs being very respected for their sales skills, and integrity. Our family’s business achievements are a tribute to hard work and the successful application of the spiritual values the Siri Singh Sahib has always shared with us.

3HO and food has had a long and glorious association. We all share memories that can easily be stimulated by the smell of Yogi Tea cooking, or by catching a whiff of Solstice soup wafting through the brisk morning air, the feel of prasad placed in your hand and its moist fragrance and sweet taste converging on your tongue.

Food is a connection that links our psyches together, past, present and future. It is a powerful conductor of energy and spirit. The traditions that the Siri Singh Sahib taught and lived are ancient and sacred and steeped in wisdom. Thank you Siri Singh Sahib Ji, for your infinite grace and generosity.