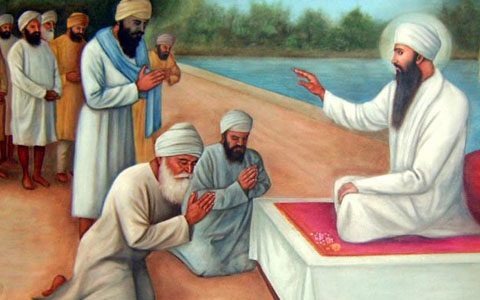 The Story of the Origin of the Shabad, Dhan Dhan Ram Das Gur

The first Guru of the Sikhs, Guru Nanak, was served by a wonderful musician, Mardana, who accompanied the singing of the Guru’s sacred compositions for many years. After Mardana passed away, two young and talented musicians, Balwand and Satta, became prominent musicians in the Guru’s Darbar (court). They served Guru Nanak and after him Guru Angad, the second guru, then Guru Amar Das, the third guru, then Guru Ram Das, the fourth guru and finally, they served Guru Arjan, the fifth guru.

Guru Arjan had only recently become Guru. In the change between Guru Ram Das and Guru Arjan there had been a period of some confusion and intrigue involving the elder brother of Guru Arjan, Priti Chand, who thought that he should have been crowned as Guru. Because of this confusion there was a period where fewer visitors were coming to visit Guru Arjan. So, when Balwand and Satta asked Guru Arjan for the money for the wedding, there was not much money available. The Guru gave the musicians what he could but the musicians thought it was not enough. They became reactive and angry. They descended into the spiritual stage called, “Shakti Pad” – a time of tumultuous challenge to one’s highest commitments and confronting of the ego.

Finally, Guru Arjan announced that the musicians were no longer welcome to the Guru’s court and anyone who suggested otherwise would have his face blackened with coal and would be paraded through the town facing backwards on a donkey.

This change in the Guru’s court was huge. For such a long time, Balwand and Satta, and a few other professional musicians (Rababis) had played the music in the Guru’s court. Few of the Guru’s Sikhs had made much effort to learn or master music. With both Balwand and Satta no longer in the court, there were few of the same mastery to play the music. Guru Arjan decreed that his Sikhs should learn the theory and practice of the art of music. He taught his Sikhs Kauri Kriya which involves singing a 19-note scale as a meditative practice. Through the diligent practice of this Kriya several musicians were nurtured to take over the playing of the music in the Guru’s court. Guru Arjan instructed his Sikhs that they should no longer be dependent on professional musicians; that volunteer musicians (Ragis) should lead the chanting and singing. He, himself, became proficient in music and even devised his own bowed instrument, the Sarinda, which he played when he led the singing. It was at this time that Guru Arjan clearly defined the qualities that every Ragi should manifest: 1) mental clarity and heart-felt devotion to God, 2) detachment from Maya, not running after money, 3) the five virtues of Truth, Contentment, Faith, Compassion and Patience, 4) freedom from pride or hypocrisy, 5) the neutral presence of God with joy and peace, 6) dedicated to serving the Sangat (holy congregation).

Things were stabilized in the Guru’s court and more and more visitors came to receive the Guru’s Darshan – the blessing of being in the presence of someone Divine. The granddaughter of Satta (the one who was to be married) started telling her grandfather that he and Balwand had made a mistake. She told them that they should not have left the Guru’s court – that they should not have turned their backs on the Guru. Slowly, Balwand and Satta also started to have a change of heart. They realized that this had all been a test of their commitment to their spiritual path. And through that realization they started to have a spiritual awakening.

Balwand and Satta used the renewed desire to be in the presence of the Guru as the inspiration to compose a beautiful suite of spiritual songs, Balwand di Var, about how much they honored and loved all five of the Gurus that they had served. The shabad “Dhan Dhan Ram Das Gur” is part of this composition. But they still had the problem that Guru Arjan had barred them from coming to his court. So they enlisted the help of a very wise Sikh from Lahore who was compassionate and sympathetic to their situation.

This wise Sikh blackened his own face and rode a donkey facing backwards all through the town on his way to see the Guru. When Guru Arjan witnessed the extreme humility of this wise Sikh, he granted that Balwand and Satta could return into his presence.

Upon first returning into the Guru’s presence, Balwand and Satta performed the new composition in praise of the five gurus they had served. Guru Arjan was so delighted by the spiritual transformation that the two had attained and he was so delighted by the composition they presented, that he whole-heartedly welcomed them back into his court. The composition was so spiritually elevating that Guru Arjan declared that it would be included in the Adi Granth – the huge compilation he was creating to embody the best of all spiritual expression at that time from all traditions.

This marked the first time a composition was included that was not composed by someone who was universally recognized as a saint or sage. Although Balwand and Satta had come from humble origins and had not been recognized as divine beings, their personal transformation was so profound that the compositions they offered were immediately recognized as worthy of inclusion in what would later become the Siri Guru Granth Sahib – the living Guru of all Sikhs.

Thanks to the teaching of the Siri Singh Sahib, Yogi Bhajan, thousands of people around the world now have the blessing of being able to call on the miracle of Guru Ram Das through the power of the Naad in the words of this shabad and through the sublime prayerful intention.