Amritsar-born Bhupinder Singh of Holland has come up with his third book,“The Dutch Sikhs: A Brief History,” on the accomplishments of Sikhs who have adopted Holland as their country.

Known for his great work on the world wars depicting Sikhs’ contribution to the world during the wars, the book revealed the history of Sikhs living in Holland.The book contained a large number of coloured and black and white photographs about the Sikhs activities in the country, besides preserving several precious documents, including letters of the government officials about the Sikhs position, rights, role and their identity.

The present work disclosed that the Sikhs were known to the Netherlands since the times of Sikh general Banda Singh Bahadur. It explores the history of the Netherlands (The Dutch people), Amsterdam and its History, History of the Dutch Sikhs (from the time of Baba Banda Singh Bahudur) where one chapter with 10 pictures is dedicated to Siri Singh Sahib and contribution of Siri Guru Ram Das Ashram Amsterdam, cutting of Kohe – Noor Diamond of Maharaja Duleep Singh by the dutch merchants of Amsterdam, Dutch – Sikh relation of Ist and 2nd World wars, Olympics, Maharaja of Patiala, Lt. Gen. Yadvindra Singh as Ambassador of India in the Netherlands 1973-74 who died here, Sikhs – resident of Holland since 1970, Victory of Turban and sword and Recognition of the Sikh Identity in the Netherlands, Prince Claus of Holland and much more, also throughout more than 150 pictures have been depicted.

Other writings of Bhupinder Singh are listed below: 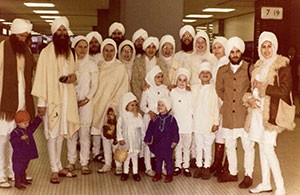 Sikhs in the Netherlands: A Brief History

Born in Punjab, but living in Holland, Bhupinder Singh compares the history of the countries which shaped his life. In this article, he outlines a brief comparison of these two, very different regions of the world, their histories, their people. And how they have come together in the lives of Dutch Sikhs.

A tourist visiting the exotic city of Amsterdam might come across Sikhs who, besides practicing other professions, own most of the over fifty restaurants that serve Indian cuisine. He often inquires about the presence of Sikhs in Holland and their present position.read more > 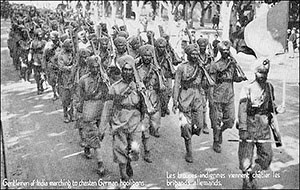 Two World Wars and the Sikhs

At a time when social scientists claim that in reality, the ethical society is located in the West, it is time that it pays attention to what the Sikhs have done for the construction of that part of the world. The Sikhs came forward and helped the Europeans at the time of grave crisis of World War I and II and gave their lives in thousands. In return, all they are asking is the free world to come forward and give due respect that to our community and to our symbols of faith.