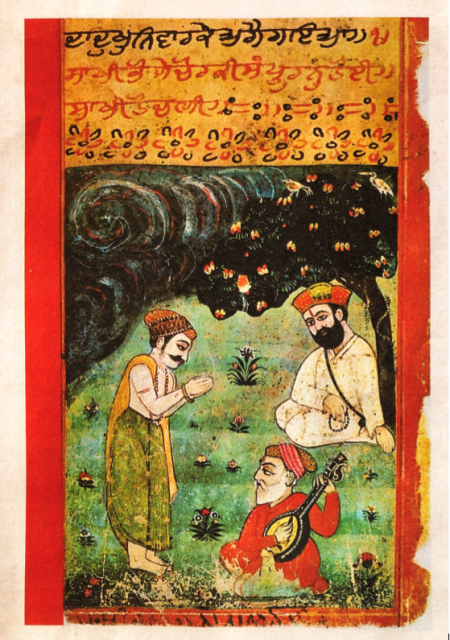 Continuing on their way Baba Nanak and Mardana entered a great and fearsome wilderness where no dwelling was to be seen. One day, in accordance with the command of God, there came darkness and a terrible storm. Around them ﬂashed black, white, and red; torrents of rain fell as awesome black clouds rolled over.

Mardana was terriﬁed. “Babaji!” he cried. “A mighty storm has blown up. It is raining! Let us ﬂee! Come, let us take shelter under a tree!” ‘Balahu va‘hi guni’ Mardana, (say praise to the Guru) and nothing will come near you,” answered Babaji. “This darkness and rain, and these clouds of smoke, will go. Keep calm.”

Gradually the darkness and the rain lifted. When they had cleared, there appeared the ﬁgure of a demon with huge fangs, the top of its head touching the heavens and its feet on the ground. Enormous was its belly and terrifying its evil eyes. Fearsomely, it advanced towards them. “Babaji!” cried Mardana, “the Guru saved us from the storm, but this calamity we shall not escape!”

“Say ‘Praise to the Guru,’ Mardana,” replied Babaji, “and like the storm this too will depart. Keep calm.”  In accordance with the command of God the apparition assumed the form of a man standing respectfully erect before them in an attitude of submission. “Who are you?” asked Baba [Nanak], and it replied, “Gracious one, I am Kaliyug. I am greatly honored by your entry into my kingdom, into this domain of mine. Please accept an offering from me.”

“What is there in all that you have to offer?” asked Babaji. “Tell me… may I ask whatever I please?” “Gracious one,” replied Kaliyug, “if you command, I shall erect a palace studded with pearls and anointed with musk.” In response Baba Nanak sang a shabad in Sri Rag. “Mardana,” he said, “play the rabab so that I may sing a shabad.”

“If there were to be built for me a palace of pearls encrusted with jewels, anointed with musk, with saffron, with the fragrance of aloes and sandal, forbid it, O Lord, that beholding it I should forget Thee and fail to call to mind Thy Name. Without remembering God let my soul burn and be consumed. Having enquired of my Guru I perceived that there can be no other dwelling-place for me.”

Kaliyug then said, “If you so command I shall encrust the whole world with diamonds and stud a bed with pearls and rubies.” In reply Babaji sang a second stanza.

“If the world were to be encrusted with diamonds and rubies, my bed studded with rubies; and if there were to be an alluring damsel, her face glistening with jewels, tempting me with seductive gestures, forbid it, O Lord, that beholding such temptation I should forget Thee and fail to call to mind Thy Name.”

Kaliyug then said, “If you so command, I shall give you command over all lands.” Baba [Nanak] sang another stanza.

“If I were to be a monarch, one who gathered an army and sat upon a throne; if I were to rule all, Nanak, it would be in vain. Forbid it, O Lord, that holding such authority I should forget Thee and fail to call to mind Thy Name.”

“I have no use for what you have been describing,” continued Babaji.“What else do you have ? What kind of kingdom do you have? What manner of deeds do you expect from your subjects and what way of life do you impose on them?”

“My Lord, in my kingdom the way of life is of the kind which is characteristic of the Kaliyug: hunger, lethargy, thirst, abuse, avarice, sloth, drunkenness, and indolence. Highway robbery, gambling, strangling, slander, the four cardinal sins, falsehood, deceit, anger, greed, possessiveness, and pride abound. There is scarcely one in ten million who can evade my authority. No, all are in my power.”

“I am asking you for a boon, brother,” said Babaji. “Gracious one,” replied Kaliyug, “I shall do whatever you command.”

“Let not any of my Sikhs who may be under your authority be harassed, brother,” said Babaji, “nor, any Sangat of mine which may be within your domains. Do not let your shadow fall upon them. Let not the recitation of shabads, mercy and benevolence, holy charity, remembering the divine Name, and bathing in the tirath of Truth be neglected.”

“Merciful one,” Kaliyug begged him, “forgive my error. Of all the ages, my authority is the greatest.” “If you are going to give a boon,” replied Babaji, “then let it be this. Let my Sangats live in peace, happiness and the awe of God.”

“You are omniscient, merciful one,” answered Kaliyug. “Even if one is regarded as a mighty sadhu, to me he is a mere man.”

“If you are going to give a boon then let it be this,” repeated Babaji. Kaliyug then adopted an attitude of submission. “My lord” he said, “my life, my soul, everything is at your disposal.” “Swear to me that this is the case, brother,” answered Babaji. Kaliyug swore it three times and fell at his feet.

Baba Nanak was ﬁlled with joy. “Go on your way,” he said. “your glory shall exceed that of all the other ages. In your kingdom there will be kirtan and katha of the most exalted kind. In other ages men performed austerities for a hundred thousand years in order to be liberated, but in your age if anyone meditates upon Naam with undivided concentration for only half an hour he will be saved.” 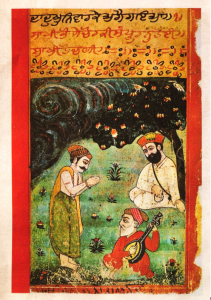 About Illustration 10 – The Encounter with Kaliyug

The picture of Kali yuga makes an important point of Sikh theology. Guru Nanak created religion beyond the evil inﬂuence of Kali yuga to ensure its effectiveness. The text indicates that Kali yuga was ordered by Guru Nanak to assume a human form. His submission to Guru Nanak in the picture corroborates his promise to him in the text that he would not harm his Sikhs. In the picture, Baba Nanak is in the ecstasy of prayer in the court of God. It is literally an ek + stasis of a dancer-like posture.

The hands of Guru Nanak are pointing out to God as if they are offering him the rosary of devotion. Looking more attentively at the picture one realises that the weight of Guru Nanak’s body falls on neither of his feet. Inspiration has lifted him up, but his ﬁgure is not unstable in the painting. Probably, the falling weight of Guru Nanak’s head makes it balance. The stretched neck has raised his face slightly as if he were concentrating on God only to be dazed by His glory. An impression of the ecstasy of Guru Nanak can be had from the bird in the tree which is looking intently at him. Guru Nanak’s inspiration is affecting Mardana too as he plays his rebec ecstatically. 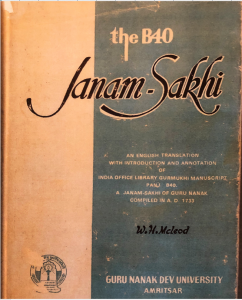