I remember the first time I heard the sound and vibration of Guru Nanak Ji’s Song of the Soul. It was during my first Sadhana, the first day of my training as a Kundalini Yoga and Meditation Instructor.

I really had no idea of what I was saying. I tried to read while listening and recognized some of the sounds of the words, which I knew, and were like a clue of its possible meaning. Spontaneously and automatically, I felt a deep attraction to what I was reading.  I tried to accurately say the words that I felt were sacred, while my ears wanted to embrace the sound that was vibrating in the yoga room with all of the united voices from the Sangat.

I always loved the sound. My approach was through music and spoken word, singing and pronunciation, vocalization and harmonious projection of sound. I am a National Broadcaster and was trained in the technique of spoken voice and public speaking. As a singing practitioner, I always recognized the voice as an expression of being.  Added to my experience as an actress and drama professor, the projection of voice and sound were part of my training and study.  But this new sound that I was listening to and trying to repeat was so unknown or perhaps forgotten to me.  While I tried to recite it, my one thought was that I would spend as much time as necessary until I could pronounce it correctly. What I did not imagine was all that this love song was going to mean in my life.

I set out to begin a 40-day practice of Japji Sahib. It was my first 40-day practice, which I started when I returned from the first module of a teacher training retreat. All my attention at the beginning of the practice was on following the transliteration with the most correct pronunciation possible.  Therefore, I read and also listened to audios during the day, “training my ears”.

I began to wonder many things. Who was Guru Nanak? What was he saying? Was it a poem, a song? I had a lot to discover. While continuing with the practice, I got a translation of Japji Sahib, because I knew it was very important to know what I was saying. I had the Spanish translation, but I still wanted to get a little closer to understanding the message. I deeply wanted to relate to this jewel of wisdom.

I got on the web and downloaded and started reading the book “Japji Sahib, the Message of Guru Nanak” by Kirpal Singh, a Holy Master of Punjab. On a daily basis I kept going with the practice and reading and studying this book.

I completed the 40-day practice and continued with motivation and practice. One day the magic happened. My lips not only pronounced this sacred sound, but I could feel a constant pounding of its vibration. A field of subtle and at the same time noticeable energy manifested itself as I surrendered myself to the power of the Naad, united from devotion to my Beloved and from my enormous love and respect for the message of Guru Nanak Ji.

His extraordinary message: the way he perfectly describes every soul’s journey unto the realization of God. The explanation of the wonderful worlds created by the unique and divine Spirit, can immerse the devotee in a sacred experience. With so much to discover in his paurees, I got answers to questions I asked myself since I was very young. There was not much more to analyze or know.  I knew that I just had to allow my whole being to merge into the Shabad Guru.

As the 5th Pauree says:

Oh Nanak! Sing to the Lord, who is the treasure of gifts.

With love towards Him, in your heart, sing and listen.

The pain will be removed and peace will come to your house.

The word of the Guru is the stream of the sound of Naad and the wisdom of the Vedas.

And then I knew that it would be as it says in the 32nd Pauree:

If my tongue became ten thousand tongues and these multiplied by twenty times more.

Hundreds of thousands of times, I would repeat the name of the Lord of the world.

I continued experimenting with 40-day practices of the paurees, I learned of their power over the chakras and spiritual bodies and their indescribable healing force that is a gift from the Infinite.

Since that first Sadhana until today and forever, Japji Sahib is part of my life.  It is the Master raising my Consciousness and purifying my life. Every time I recite it, I prostrate from my heart to the mastery and wisdom of Guru Nanak and I thank that first day in which, through the word, I gave my entire Being to the Guru. 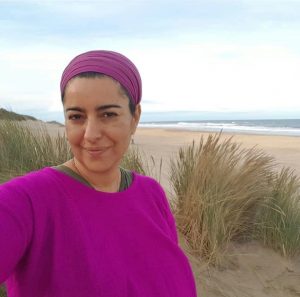 Har Tirath Kaur Khalsa founded in 2009 the “Caminos Al Infinito Center”. She is a KRI Level I Associate Trainer. She has worked as a Holistic Therapist and Spiritual Consultant with years of experience in consulting children, teenagers, adults and couples.

She performs Horse-assisted Healing (Holistic Equine Therapy) and facilitates Women’s Leadership Retreats, such as the Warrior Woman of Light Camp, among other courses based on the teachings of Yogi Bhajan.

She is a Gong Therapist and facilitator of the Red Tents for the release of taboos and female empowerment. She is a traditional Usui Shiki Ryoho Reiki Master and Sat Nam Rasayan Healer. She also works in other methods, such as Regression Therapy and Metamorphic Healing.

She loves music and songs, nature and especially horses.  As a National Broadcaster, she has been instructed in performing arts as an actress and Drama Director, and taught Drama for children and adults, as well as Oratory and Radio and Locution workshops.