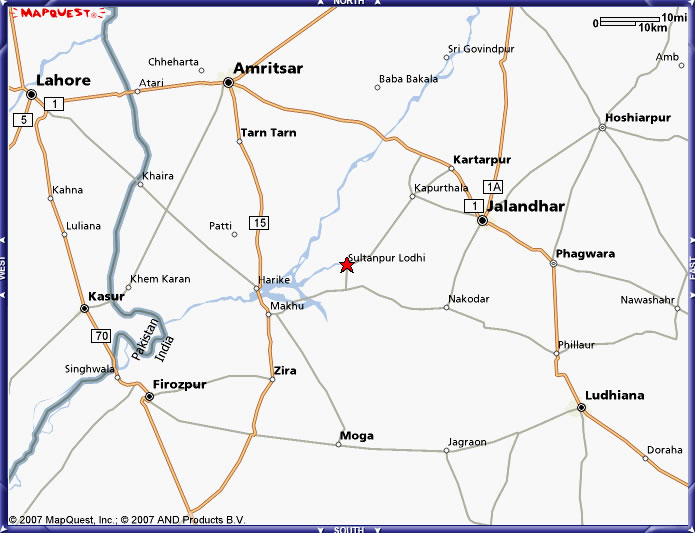 Sultanpur Lodhi (31,22N; 75,20E), is an old town in Kapurthala district of the Punjab. It is located about 35 kms south-east of Amritsar and covers an area of about 10 square km. It is situated on the south bank of a rivulet, called Kali Bein about 10 kms above the confluence of Beas and Sutlej.

Guru Nanak lived in Sultanpur Lodhi for several years before setting out on his famous travels (Udasis) to deliver his message around the world. In this town lived his sister, Bibi Nanaki, and her husband, Bhai Jai Ram, an official in the service of Nawab Daulat Khan Lodhi, a feudatory chief, who became governor of the Province of Lahore during the first quarter of the sixteenth century.

At the insistance of Jai Ram, Guru Nanak took the job of Modi (manager) of the Nawab’s provision stores. During that time there grew up a sangat, holy fellowship of disciples, which so prospered that Bhai Gurdasin his Varan (XI.21), called Sultanpur the “treasure of God’s adoration.” Today Sultanpur Lodhi has several gurdwaras commemorating events connected with the life of Guru Nanak. 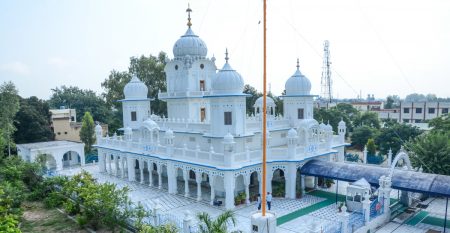 Gurdwara Ber Sahib, the principal shrine at Sultanpur, is situated on the bank of the rivulet Kali Bein, half a kilometer to the west of the old town. Guru Nanak performed his morning ablutions in the Bein and then sat under a ber (Zizyphus jujuba) tree to meditate. Guru Ji meditated at this tree daily for 14 years, nine months and 13 days. It was during one such ablution that Guru Nanak had what is described, in the Janam Sakhis, as a direct communion with the Divine.

As the Janam Sakhis narrate the details, Guru Nanak one morning disappeared into the stream and was not seen for two days. When he reappeared at a spot, 2 km upstream, now known as Sant Ghat, the first words he uttered were, “No one is Hindu, no one is Musalman (Muslim).” Guru Nanak was now ready to embark on his long journeys. Gurdwara Ber Sahib is built by the side of an old ber tree which is believed to be the one under which Guru Nanak would sit in meditation. The present building of Gurdwara Ber Sahib was built by Maharaja Jagatjit Singh of Kapurthala. The cornerstone was laid by Bhai Arjan Singh of Bagarian on 25 February 1937, and the Gurdwara was on completion dedicated by Lieutenant General Maharaja Yadavinder Singh of Patiala on 26 January 1941. Standing on a high plinth and entered through a portico, supported by octagonal columns, and a small entrance gallery is the high ceilinged, marble floored hall.

At the far end, marked off by a high archway decorated with floral designs in stucco, is the sanctum sanctorum, where the Guru Granth Sahib is seated on a whitemarble palakJ or canopied throne. Besides the daily services and observance of important Sikh anniversaries, a largely attended fair takes place each November to mark the birth anniversary of Guru Nanak.

Gurdwara Hatt Sahib, south of the old fortresslike serai, marks the spot where Guru Nanak worked as the custodian of Nawab Daulat Khan’s provision stores. The building comprises a hall, with a square sanctum in its middle. Above the sanctum is a square room with wide arched coping and a lotus dome topped by a goldplated finial. Thirteen polished stones of different sizes, believed to be the weights used by Guru Nanak, are on display in a glass cabinet.

Gurdwara Antaryatma Sahib, a flatroofed rectangular room marks the site of a mosque to which Nawab Daulat Khan had invited Guru Nanak to participate in namaz or Muslim prayer. Divining how the Nawab and the Kadi were only outwardly going through the ritual with their minds engrossed in worldly thoughts, Guru Nanak stood aside. When the Nawab asked him why he did not join the prayer, he told them exactly what he and the Kadi had been thinking of as they prayed. Both, as say the Janam Sakhis, fell at the Guru’s feet. Nothing remains of the mosque now except the entrance gate to the compound.

Gurdwara Guru Ka Bagh, a flatroofed hall in the interior of the town marks the premises where Guru Nanak resided with his wife and children during his stay at Sultanpur. The Guru Granth Sahib is seated in the hall on a rectangular platform. A narrow well, now covered, is a relic of the days of yore.

Kothari Sahib, a narrow low roofed cell in a small house in Mohalla Vaddian, is where Guru Nanak was detained while his accounts were being checked following a false complaint lodged by his detractors. In one of the two small rooms close by is seated the Guru Granth Sahib.

Gurdwara Sant Ghat, on the bank of the Bein, is where Guru Nanak reemerged on the third day of his disappearance into the river near the site of Gurdwara Ber Sahib.

Gurdwara Bebe Nanaki Ji, constructed in 1970’s, honours the memory of Bebe Nanaki, elder sister of Guru Nanak. The actual house, a threestoreyed old building where Bebe Nanaki is believed to have lived with her husband, Jai Ram, is inside the old town in Mohalla Chhimbian. But the premises being in private possession, a public monument (cornerstone, laid on 13 November 1970) was raised in the form of a gurdwara by Bebe Nanaki Istri Satsang Charitable Trust under the chairmanship of Bibi Balvant Kaur of Birmingham (United Kingdom). The Gurdwara Bebe Nanaki JI comprises a central hall, with the Guru Granth Sahib seated in a white marble palaki at the far end. The Guru Granth Sahib is also seated in a small sideroom symbolizing Bebe Nanaki’s own lodging. Over the sanctum, above the hall roof, is a square domed room with arched copings. Bulbous domes adorn the corners of the hall roof.

Gurdwara Sehra Sahib is dedicated to Guru Arjan who passed through Sultanpur in 1604 on his way to Dalla for the marriage of his son, Har Gobind, the future Guru Hargobind (revered for his concept of miri and piri). According to tradition, the marriage party stayed overnight at this place and the sehra, or ceremonial wreath was fastened round the bridegroom’s head here. The Gurdwara, within a brickpaved walled compound, is an octagonal domed room in which the Guru Granth Sahib is seated. All these shrines at Sultanpur Lodhi with the exception of Gurdwara Bebe Nanaki JI, which is under the management of the Trust, are administered by the Shiromani Gurdwara Parbandhak Committee through a local committee.

Sultanpur Lodhi is one of the ancient cites of India. Thought to have been established in about the fist century of the current era it has witnessed the up and downs of politics, religion, literature, trade and commerce, forf more than 20 centuries.

In the 12th century the Nawab Wali Muhammad Khan, cousin brother of Emperor of Delhi Nasir-u-din Muhammad Shah was appointed as the Hakim (ruler) of Punjab. Once one of the two sons of Hakim, Sultan Khan passed the remains of the city and was struck by the beauty of the surroundings. He decided to rebuild the city calling it by his name and so it was that the memory of Sarwmanpur faded as the new city of Sultanpur Lodhi rose out of the ashes.

This new city of Sultanpur Lodhi was also the center point of the old trade route between Delhi and Lahore. It was one of the major trade centers of north India at that time. It consisted of 32 to major markets and about 5600 shops. At that time the city was spread over in an area of 8 miles. The black canal at that time runs through the center of the city. These features at that time were more than enough to make it a big city.

Sultanpur Lodhi is given a great importance in the ancient book of Aine Akbari. This city in those days had many royal gardens and farms. There are many of those royal buildings, which are still present. One of those is Hadera, which was once the place of rest for the queens on their way to royal gardens. At that time it was a marvelous building. It was also the place of entertainment for royal family, where dances and other royal functions were organized. Unfortunately today this place is now just an old building, waiting for its end.

Sultanpur Lodhi, in those days was not only famous for its surroundings and trade, but also for its educational institutions. The city was also called ‘Perran Puri’ {city of monks}. Many historical religious personalities are related to Sultanpur Lodhi. Many of the tombs (Makbaras) of those monks are still present in the city. There were many Islamic schools for the study of the Qur’an (Madrasas) in the city. Two of the sons of Shah Jahan, Dara-Sikoh and his younger brother Aurengzeb completed their studies in one of these famous white masjids of Sultanpur Lodhi, in which the Madrassas were usually located. 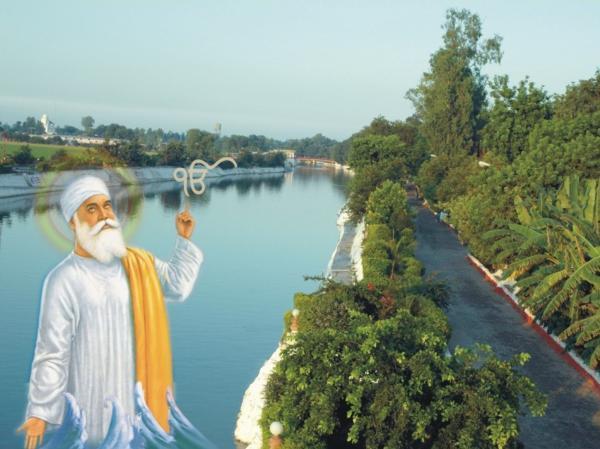 At the end of the 14th century, the governor of Lahore Daulat Khan Lodhi was the ruler when Guru Nanak dev Ji came to the city of Sultanpur Lodhi. During the 14-year stay of guru Nanak dev Ji in the city, many new stories, tales and events were attached to the city.

Sultanpur Lodhi has been related to Sikhism since its beginning in 14th century. After Nanakana Sahib (now in Pakistan), Sultanpur Lodhi is the only city which can be said to be most related to the life of the first guru of the Sikhs, Guru Nanak Dev Ji.

The association of Guru Nanak with Sultanpur Lodhi began in 1475, when Bibi Nanki Ji, Guru Nanak’s older sister was married to Shri Jai Ram of Sultanpur Lodhi. Guru ji’s father was concerned about the future of their son. Resulting which, in 1483 guru Ji was sent in the custody of shri jai ram. Guru Ji was employed as the Modi {store in charge} of the modi khana {food supplies store}. Many tales and stories are famous about modi khana and guru ji.

In June 1488, Guru Nanak dev ji was married to Bibi Sulkhani ji in Sultanpur Lodhi. While staying in Sultanpur Lodhi he gave birth to two sons, in July 1494, Shri Chand ji and in Feb 1497, Lakmi Chand. Guru ji spent more than 14 years in city. During this period guru ji was the talk of the town. Then suddenly in late 1497, news of guru ji drowning in the canal while bathing spread in city like fire. Whole city was in deep sorrow. After three days guru ji came out of canal with the teaching of “na koi hindu, na koi muslman” {no one is hindu, no one is muslim}. After that incident guru ji left his job and started his first udasi {religious journey} from Sultanpur Lodhi.

After Guru Nanak Dev Ji, the fifth Guru Arjen Dev Ji on the occasion of his marriage in nearby village Dhala rested in Sultanpur Lodhi. A Gurudwara having the Sehra and the wedding cloths of guru Ji is constructed on that place.

After so much development of the city, unfortunately in 1739 when the Nadar Shah the famous invader, on his way to Delhi invaded Sultanpur Lodhi and it was again almost destroyed. After looting whole city, it is set to fire. After that Ahemd shah Abdali again destroyed it. Later Sardar Jussa Singh Ahluwalia, after taking the historic monuments under his custody, re establishes this city from the very beginning. But even then it cannot re-gain its old prestige and importance.

This information about Sultanpur Lodhi is courtesy of SikhiWiki.