The Twenty-ninth Pauree is a shield of protection.
It protects you from your enemies by simply vaporizing those who wish you harm. 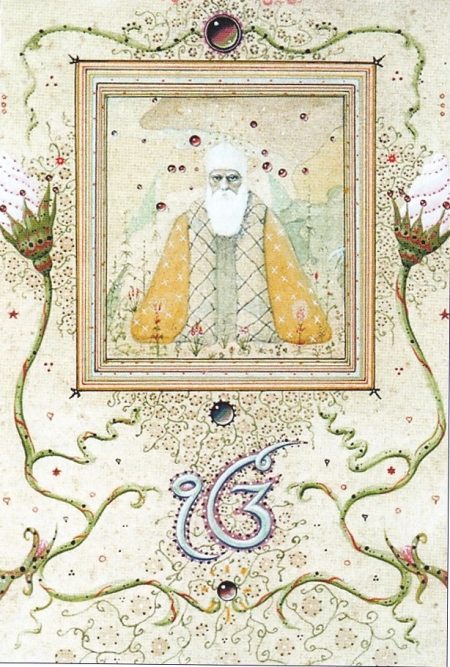 In the 29th pauree, Guru Nanak continues his message to the yogis to abandon empty rituals and embrace God’s Will. The yogis were very specific about their food and all the rituals surrounding it. There were strict guidelines to be followed for the storing, cleanliness, and preparation of their meals. Violation of those guidelines were considered to be a serious offense. Therefore, the stewards who stored and managed the food, as well as those who prepared it, were carefully chosen and held considerable trust. When the food was ready, horns were blown announcing it to the yogis.

Guru Nanak tells the yogis to make Divine Knowledge their food and Mercy their attendants. Then referring to the horns that blow announcing the food, Guru Nanak advises them to hear the unstruck sound, the Anahad Naad, the vibration of creation that plays in every heart.

Guru Nanak goes on to say, Aap naath naathee sabh jaa kee ridh sidh avaraa saad. Nath is a yogic tradition that holds Lord Shiva as the Ad Nath, the original yogi. These yogis were powerful siddhas who were deeply immersed in the occult powers. Guru Nanak traveled to meet the Nath yogis early in his teaching mission to counsel them just as he does in these paurees.

Here he says that God is the highest Nath, and occult powers, tastes, and pleasures are just prayer beads in the mala of God. Guru Nanak says that despite the intense efforts of the yogis, sanjog vijog, being close to God or separate from Him, was not in their control. This happens according to our destiny and the all-powerful Will of the Divine.

“Sanjog is good luck; vijog means bad luck; in simple English I am translating. Vijog means the power which separates you and sanjog means the power which unites you, Sanjog vijog du-ei kaar chalaavaeh laykhay aaveh bhaag . . . In your share, comes your destiny. Bhaag – it cannot be destiny positive, it cannot be fate negative, it is the neutral. Subhaag is positive; abhaag is negative; bhaag is neutral.”
– Siri Singh Sahib,  July 5, 1985

Let spiritual wisdom be your food, and compassion your attendant;

the sound current of the Naad vibrates in each and every heart.

He Himself is the Supreme Master of all; wealth and miraculous spiritual powers,

and all other external tastes and pleasures, are all like beads on a string.

Union with Him, and separation from Him, come by His Will;

we come to receive what is written in our destiny.

I bow to Him, I humbly bow.

The Primal One, the Pure Light, without beginning, without end.

Throughout all the ages, He is one and the same.

Enjoy this beautiful musical recitation of Aadays Tisai Aadays, which includes the 29th Pauree. Available to stream through the SikhNet Gurbani Media Library: