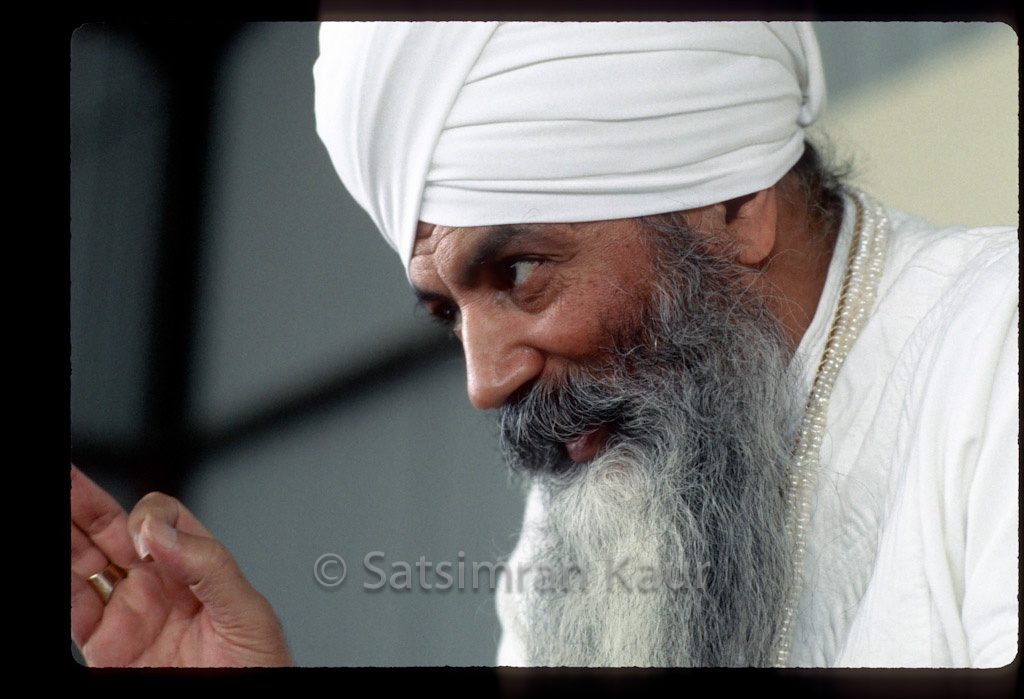 Portrait of Yogi Bhajan at Summer Solstice in New Mexico in June, 1984

Excerpted from ‘Gurdwara Lecture – The Day of the Akal Takhat,’ give on February 6, 1987 in Los Angeles, CA, U.S.A.  by the Siri Singh Sahib, Yogi Bhajan

This is a shabad by Guru Arjan Dev.  Guru Arjan Partakh Har, personified God. He stood the test of fire and came out totally pure . . .

When we are singing this Narayan Shabad, the vibration of it will restore the glory of the Khalsa . . . This Narayan Shabad has a history and a power behind it.  You have seen the success of the other shabad, haven’t you?  Well, test this one, too.

This shabad will do five things:

1) It will restore the glory of the Khalsa

2) It will restore the glory of the Akal Takhat

5) It shall give you the amalgamation, merger and oneness with God, whosoever shall sing.

If that doesn’t happen, wherever you perform my last rite, as a religious duty, spit at that place and never leave a flower.  But as Guru has said, so it shall happen and I’m just taking this opportunity today to communicate with you.

One who is confronted with dire difficulty, to which no one offers any support,

Whose friends have turned into enemies and even kinsmen have deserted him,

When all support has given way and all hope has been lost,

If he should then remember the Supreme Lord, even the hot wind shall not touch him.  (Guru Arjan Dev Ji, Siri Guru Granth Sahib, p. 70 – 71)

This shabad has been sung by Guru Arjan Dev for us to practice.  I hope every night in your silent, saintly, instituted sense of that communicated magnetic field, in the realm of the urge to participate in the valleys of those realms where no man has a voice, you will come to this ashram and sing those words created by Guru Arjan, the personified God, Himself.  Those words made him to stand to purity by the test of fire, and when he came out the other side, Guru was installed who could wear the miree and piree, and thus became Har Gobind.  And it entitled him to install the Akal Takhat.

What is in the heavens is on the earth.  So it is written, so it shall be done.  But it needs a little help from you, a little effective participation. Today you may not care what I say to you because you know I can speak and I can tell you. Very soon you will miss one thing. There will be nobody like me to tell you. Then you’ll have to depend upon your dreams, and your dreams and extra-sensory perception to receive the sound, and those kinds of things.

But, that’s a human formula.  That’s too little in comparison to what you have, the Siri Guru Granth Sahib.  I am asking you to understand today that the body is a shell and it shall fall because it is a confinement. It keeps me and you on the earth.  Earth is not our home.  Earth is the creation, it is Kar.  It is one creation of the Ong.  But I do not belong to the earth.  I can visit it, live here, then go back home.

I came here, I got married, and I have children.  Then I married in a different way.  I created so many children.  So this children business is going on.  One is jiwan sansaar.  Other is shabad sansaar.  You are my divine children through shabad sansaar.  And in that we have now become a Khalsa family.  We have become Undying.  We took Guru Gobind Singh of Akal Moorat.  Then next is Ajoonee Saibhang Gur Prasaad . . .

Because we are Sikhs of the Shabad, and we are the sons and daughters of Guru Gobind Singh, and we are the soul and the soul-ownership of Guru Arjan.  That’s why this shabad was given to us and that’s why now we are going to sing it and we are going to repeat it every night!  And it is very good! The interest, the benefit, the earthly benefit to you will be 25% – a lot of money, a lot of prosperity, a lot of happiness, Sukh, Anand (peace, bliss).  Two things. Not only Anand. Sukh, Anand.  And the daa-in, the teeth of the daa-in – witch, shall be broken.  That’s the most beautiful thing in it . . .

Come. Bring friends, enemies, known, unknown.  Come.  Come you must!  Prosperous you shall become. That day!  Because you will be meditation in the construction of the sole sum of that energy which is the totality, reality and infinity of God. There is no meditation; there is not a mantra which can give us so much in such a short time . . .

Musical Recitations of the Narayan Shabad

These versions, and many others, are available to stream through the SikhNet Gurbani Media Center.

Read the full lecture on the Yogi Bhajan Library of Teachings