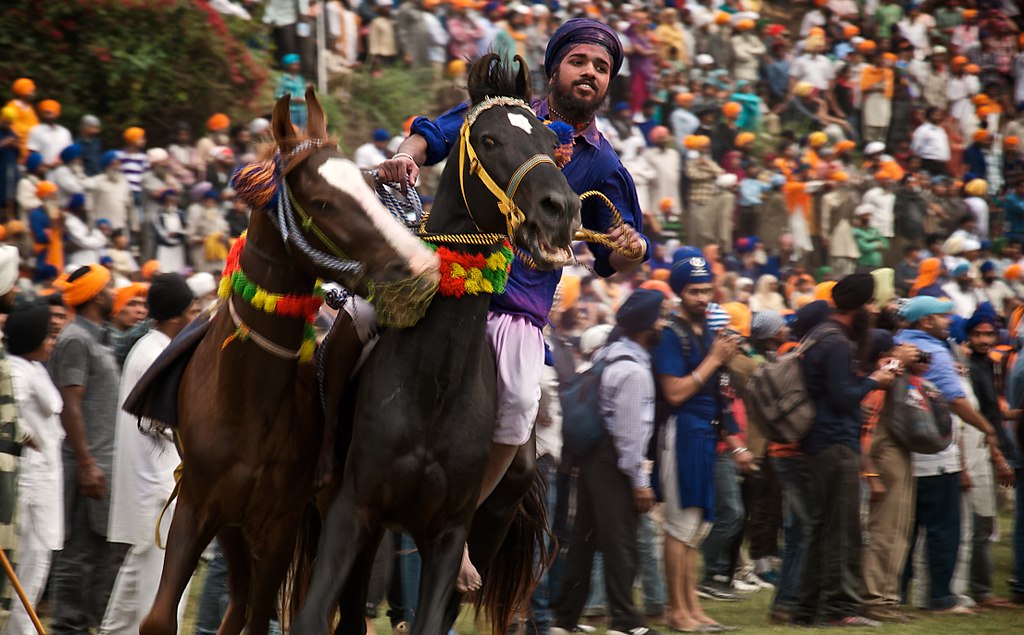 This post has been excerpted from an article originally published by SikhNet. It was written by Jotsimran Singh Dua.

Hola Mohalla is a Sikh festival that takes place on the first of the lunar month of Chet, which usually falls in March. This, by a tradition established by Guru Gobind Singh, follows the Hindu festival of Holi by one day; Hola is the masculine form of the feminine sounding Holi. The word “Mohalla” is derived from the Arabic root hal (alighting, descending) and is a Punjabi word that implies an organized procession in the form of an army column.

But unlike Holi, when people playfully sprinkle color, dry or mixed in water, on each other, the Guru made Hola Mohalla an occasion for the Sikhs to demonstrate their martial skills in simulated battles.

Together the words “Hola Mohalla” stand for “mock fight.” During this festival, processions are organized in the form of army type columns accompanied by war-drums and standard-bearers, proceeding to a given spot or moving in state from one Gurdwara to another.

The custom originated in the time of Guru Gobind Singh, who held the first such mock fight event at Anandpur Sahib in February 1701. The foothills of the Shivaliks in Ropar district of Punjab’s north-eastern region, especially around the historic townships of Anandpur Sahib and Kiratpur Sahib, have, since 1701 been playing host to Hola Mohalla.

The military exercise, which was personally supervised by the Guru, was carried out on the bed of the River Charan Ganga with the famous Hindu temple of Mata Naina Devi in the Shivaliks as the backdrop.

The Indian government eventually accorded it the status of a national festival.

This annual festival held at Anandpur Sahib in Punjab and now replicated at other Gurdwaras worldwide was started by the tenth Sikh Guru, Guru Gobind Singh, as a gathering of Sikhs for military exercises and mock battles on the day following the festival of Holi at Anandpur Sahib. It reminds the people of valor and defense preparedness, concepts dear to the Tenth Guru who was at that time battling the Mughal empire and the hill kings.

There are also a number of Darbars where the Sri Guru Granth Sahib is present, and Kirtan and religious lectures take place. On the last day a long procession, led by Panj Pyaras, starts from Takhat Keshgarh Sahib, one of the five Sikh religious seats, and passes through various important Gurdwaras like Qila Anandgarh, Lohgarh Sahib, Mata Jitoji and terminates at the starting place (Keshgarh Sahib).

For people visiting Anandpur Sahib, langars (voluntary community kitchens) are organized by the local people as a part of seva (community service). Raw materials like wheat flour, rice, vegetables, milk and sugar are provided by the villagers living nearby. Women volunteer to cook and others take part in cleaning utensils and other manual tasks that need to be carried out. Traditional cuisine is served to the pilgrims who eat while sitting in rows on the ground (Pangat).

Sikhs in large numbers still assemble at Anandpur Sahib on this day and an impressive and colorful procession is taken out in which the Nihangs, in their traditional panoply, form the vanguard while parading their skill in the use of arms, horsemanship, tent-pegging, and other war-like sports.

Originally known as Akalis, the Nihang Singhs are endearingly designated as Guru’s Knights or the Guru’s beloved. They still carry the military ambience and heroic style that was cultivated during the lifetime of Guru Gobind Singh. Nihangs constitute a distinctive order among the Sikhs and are readily recognized by their dark blue Bana and their ample Dumallas.

The most spectacular event at Hola Mahalla is the magnificent procession of Nihangs on horses and elephants and on foot carrying a variety of traditional and modern weapons and demonstrating their skill in using them.

The Hola Mahalla festival is unique and distinguishable from other festivals in that the Nihang have tried to preserve the traditional form and content as established during its inception, and strictly observed by the Akalis, for more than three centuries.