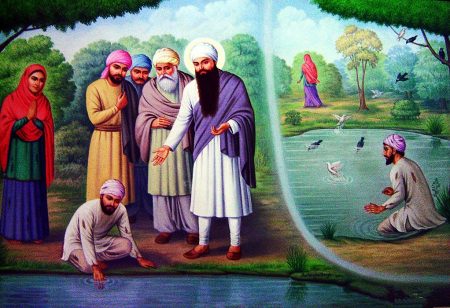 This is the story of Rajni, as told by Shakti Parwha Kaur and Guruka Singh in the book ‘Heroes, Saints and Yogis’

A wealthy kardar (tax-collector) had seven virtuous and beautiful daughters. Rajni was the youngest. Her father provided all of his daughters with graceful luxurious environments, the best teachers to cultivate their talents, and the finest clothing and food. He was very affectionate toward them. He was quite proud of his ability to provide so well for his family, and he constantly reminded them of all the things he had given them.

This kardar had arranged the marriages of his six eldest daughters to wealthy men of good social standing. Soon, it would be Rajni’s turn.One day, all seven sisters had been walking among the lush gardens on the far side of their father’s estate. On their way home, they came across some saints in meditation. Rajni was entranced by the sound of these holy men singing God’s praises, and she stayed behind to listen.

They sang the words of Guru Nanak: Naanak junt upaai kai sunmaalay subhanaah. Jin karatai karanaa keeaa chintaabhi karanee taah.“O Nanak, He who created the creatures takes care of them all. The Creator who created the creation, He takes care of it too.” Rajni was so inspired, she took off all her fine jewelry and gave it to the saints to show her gratitude for this marvelous experience.

When she got home, she told her sisters about the wonderful words that had touched her heart and soul. They noticed her jewelry was missing, and they asked her where it was. When her parents heard she had given it to the saints, her father summoned all his daughters and asked them, “Who is it that has given you your food, clothing, and jewelry? Who looks after you and takes care of you?” Rajini’s six sisters dutifully answered, “It is you, Papaji, who does all this for us.”

But Rajni gave a different answer. She said, “It is God who provides and takes care of us, as He does for all of His creatures.” Her father was furious. No matter how he put the question, nor how often, Rajini’s answer remained the same. This made him even angrier, and out of his rage and huge ego he told her, “You are ungrateful, and it is time for you to leave my house. I am going to marry you to the next man that passes in front of our window!”

As fate—or destiny—would have it, a leper who had been brought to the village to beg for food came in sight just then.

Her father demanded that Rajni be married to him at once. Obedient young Rajni had no choice. Her father had ordered it, and his word was law. So the marriage took place. She had a husband who was a leper, a poor misshapen man who couldn’t walk, who couldn’t feed himself, and who had open seeping wounds all over his body.

After the wedding, the whole family took this leper, put him in a basket, and put the basket on Rajni’s head and said, “Here’s your dowry, and this is your farewell—never come back to us ever again.”

Rajni said, “Can I have ten minutes in our house to say a prayer?” The father said, “No, cut it short and get out. That’s it. You get out of here. I don’t want to see you. I am sick and tired of your telling me that I do nothing for you and that ‘God does everything.’”

The painful story is that Rajini did say her prayer quickly, and in her prayer she said, “God Almighty I am very grateful to you. I am very blessed that you have given to me the man I deserve. My love for you is eternal and all I ask is that You help me to carry this responsibility with utmost grace.” Rajni took the basket with her husband in it, put it back on her head, and walked out of her parents’ home. She walked from village to village, getting some food for herself and her husband.

After walking many miles, Rajni, who was very thirsty, came to a pond where the nectar tank of the Golden Temple of Amritsar is today. At that time it was just a very small pond. Under a Ber (Banyan) tree she put down the basket containing her husband, covered him, gave him some water to drink, washed his face, washed his hands and said, “Please be so kind as to stay here. I am going to the nearest village to ask for some food or alms so that we can survive. Be peaceful in this basket.”

So Rajni left her husband by the bank of the pond and went into town. As her young husband sat in his basket he saw something very unusual. He saw blackbirds come and dive into the pond, and when they flew out, they had turned from black to white, like little angels. He watched this odd scene for a long time, and then he decided to try something.

He shook himself out of the basket and rolled himself right into the pond at the place now called Dukh Banjhan Ber. That same tree is still there. He dipped himself in the water, and within a few moments he found to his amazement that he was totally healed. His leper’s sores were gone.

But he had kept one finger out of the water. He reasoned, “If she comes and sees me healed she will not recognize me, then I will be able to show her this finger.”

When Rajni returned with food she saw this very handsome young man sitting there and she said, “Where is my husband?”He said, “I am your husband.”She said, “No, no, that’s not true! Have you killed that unfortunate leper just because you want to have me? No way! I am married to him, and I will defend my honor with my life!”

Her husband said, “Calm down, calm down. It really is me. I am the same person. Don’t you recognize my clothes?” She said, “Clothes? You must have stolen his clothes.” He said, “No. I am healed. I went in the pond. Look at my finger. See? Now watch this.” He dipped that festering finger in the water, and it came out perfect. She said, “No, no, no, that can’t be! I don’t believe it.” He said, “All right then. We cannot agree. I say, ‘I am your husband,’ and you say, ‘I don’t believe you.’ You say, ‘My husband is a leper.’ I say, ‘I am cured. You saw my finger; it got cured. You don’t believe it.’ You are just being paranoid.

In this town lives the saint, Guru Ram Das, let us both go to him and let him decide.” So they went to Guru Ram Das. The Guru looked at them and said, “Rajini, this man is your husband. For centuries people have been trying to find this particular pond. We have already dug santhok sar, the tank of contentment, and now we will call this place Amritsar, the tank of nectar.”

Then Guru Ram Das and the entire sangat (congregation) went to the pond where Rajni’s husband had been left in the basket and blessed the couple.

Circumstances later compelled Rajni’s parents to come there, and seeing the miracle that had happened, they offered all their lands to Guru Ram Das. Rajni and her husband lived and ruled there for some time. It was within that area, then called Chak Ram Das, or Ram Das Pur (City of Guru Ram Das), that Guru Ram Das laid the foundation for the Golden Temple.

“Says Nanak, by bathing in the tank of Ram Das, all sins and mistake are washed away.” – Guru Arjan Dev Ji

More About this Story

Gurutej Singh Khalsa published a beautiful historical novel of the story of Rajni, told from the perspective of “Akal Purakh” (God).

The following was excerpted from the prologue to the novel Rajni by Gurutej Singh Khalsa.

In the Punjab state of Northern India, approximately ten miles from the border of modern Pakistan, stands the ancient city of Amritsar. Founded around 1575 by Guru Ram Das, the fourth guru of the Sikhs, Amritsar became a major center in the region. Today it is one of the larger and more prosperous, though seriously polluted, cities of the Punjab.

The city grew up around a pool of water considered to have miraculous healing properties, and people came there because of it. The origin of the water is ancient, perhaps even mythic, and for millennia before the founding of Amritsar, that pool was a sacred place of pilgrimage and healing. Guru Amar Das, the third guru of the Sikhs, conceived a plan to expand the natural pond into a large tank, which would become an open place of pilgrimage, and to erect a mandir, or temple in its center.

The tank was excavated by the fourth guru, Guru Ram Das, and his youngest son, the fifth guru, Guru Arjan, saw the completion of the mandir in 1604. It became known as the Harimander, the Temple of God. In the early decades of the 19th century Maharaja Ranjit Singh, the Sikh ruler of the Punjab at that time, had the Harimander covered with gilded copper and white marble. Today it is more commonly known by the name the British gave it: the Golden Temple.

This is a most sacred place of pilgrimage and is open to people of all faiths without exclusion. Since ancient times the water that fills the tank has been considered to be sacred, and for Sikhs as well as many people of consciousness, it is considered to be a great blessing to take a sip of and dip in the water. Over the centuries millions of people have claimed that by doing so, the pains and illnesses of their hearts, minds, and bodies have been relieved.

You may purchase this book through Amazon here.