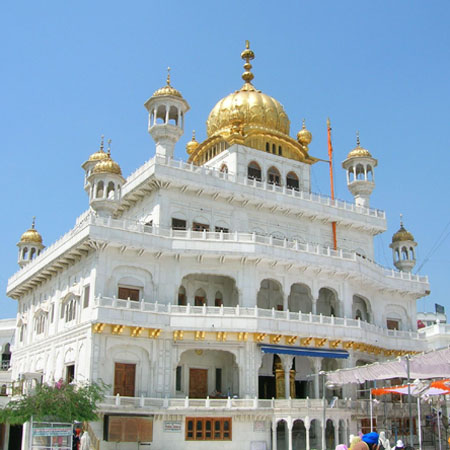 In the lecture below by Siri Singh Sahib, Yogi Bhajan, he discusses the Akal Takhat.  Here is some information about the Akal Takhat for those who may not know about it:

Akal Takhat means the Throne of the Immortal and is the highest political institution of the Sikhs. “Akal” means “The Timeless One” – another term for God. “Takhat” means “throne” in Persian.

The Sri Akal Takhat is an impressive building that sits directly in front of the causeway leading to the Golden Temple in Amritsar, Punjab, India. The Sri Akal Takhat was founded by Sri Guru Hargobind Ji on June 15, 1606 (now celebrated on 2 July) and was established as the place from which the spiritual and temporal concerns of the Sikh community could be acted upon.

It stood as a symbol of political bulwark against the Mughal Emperors in the 17th and 18th century. Various attacks on the Sri Akal Takhat and Sri Harimandir Sahib have been led in past by Ahmed Shah Abdali and Massa Rangar in the 18 century. On June 4, 1984, the Indian Army did more than just damage to the outer facade of the Sri Akal Takhat. They destroyed the sancitity of the Sri Akal Takht with tanks and reduced it to rubble, while attempting to take out Baba Jarnail Singh Bindrenwala & men in a controversial military operation known as Operation Bluestar.

~ this information is courtesy of www.sikhiwiki.org

“It was the greatest sacrifice, which was offered. Guru Arjan offered himself against tyranny.  Guru Teg Bahadur offered himself against injustice and Akal Takhat offered itself against the treacherous scheme of ungodliness. The throne of God itself put itself on the line. The martyrdom of the Akal Takhat is a living symbology, it is very subtle symbology, for all of us who understand the soul, the heart and the living principle of the universe. Those who believe in peace, also believe not to disturb the source of the peace.”

Enjoy this video, part of “The Awakening of the Khalsa” series: “Live by the Soul, Die by the Soul”.

The Siri Singh Sahib on the Akal Takhat, “The Throne Of Timelessness”

So when the magnetic psyche conflicts with the time, energy and containment of the magnetic psyche into the relevancy of that creativity, it stimulates the entire organism into the being, and the creative self is so creative that the intelligence and the discipline is not at that moment in a position to beat out the impulsiveness.

Then the human mind becomes destructive, insensitive and very active and it very, very effectively create a hysteria of expelling the energy, and commotional and neurotic satisfaction. This is nothing but an interlock of the most beautiful human energy into lower-than-animal nature. It’s called “beast” in the Western language – the beast which is forceful and effectively an onslaught of damage.

All of our life we meditate to attach ourself to earth, deeper and deeper. And when we have to quit the body, this shell drops. All our other nine bodies are so interwoven that we cannot leave this earth.

So to uplift that that characteristic… uplift that being… Guru Hargobind found out this nerve center, this focal point of the planet’s psyche and built a throne for the entire mankind. And he made the Sikhs the servants and the guardians of it. We as Sikhs don’t own that Takhat. We serve that Takhat. We are the guardians of that Takhat. And our job and our devotion and our dedication to that Takhat is that of a man of God, not of a particular religion, but of a man or woman of reality who shall serve and guard that Takhat – the Akal Takhat – the throne of timelessness. (2)

(1) Gurdwara lecture featured in “The Awakening of the Khalsa” video series debuting April 2009 on www.sikhdharma.org and on JUS Punjabi Cable Television.