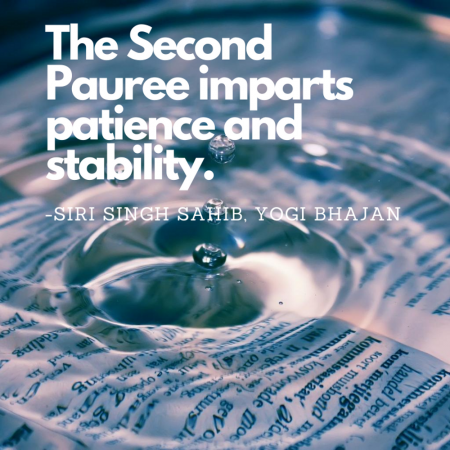 The second Paurī imparts patience and stability. – from the Teachings of the Siri Singh Sahib, Yogi Bhajan (1)

In this Paurī, Gurū Nānak talks about the word ‘Hukam.’ ‘Hukam’ means the ‘Divine order’ or ‘command’ of God.  The Siri Singh Sahib, Yogi Bhajan explains that through obeying the order of God’s command we create goodwill with the Creator to live in grace with our divinity.

We start to realize that we have two choices: either we live for ourselves (through the ego) or we live for God (through our soul).  In this Paurī, Gurū Nānak is explaining that everything is already setup and divinely guided to serve our soul’s journey. We learn that we don’t need to adjust the external world to suit our own desires. Instead, we are best served by focusing on aligning ourselves to the Divine Order within so that we live in the frequency of our soul’s knowing.

The Universe is a divinely ordered, well structured, high performance creation that is uniquely set up to challenge, test, transform and elevate our souls. Therefore, by following the Divine Order, we are taking responsibility to live to our soul’s highest potential.

As we grow in our spiritual capacity, it becomes even more relevant to have the ability to impersonally surrender to the larger context of God’s will.

Baba Atal was a young boy of 9 years old, and the son of the sixth Gurū, Gurū Hargobind. He was a deeply religious and lively boy who loved to play games with his friends.  He was called ‘Baba’ which means old man as he was wise beyond his years. Baba Atal had a good friend named Mohan, and they used to play every day for hours.  One day they were playing a game that they were not able to finish before sunset, so they agreed to continue the game the next day.  During the night, Mohan was bitten by a snake and within hours was dead. In the morning, when Baba Atal went to their play area, Mohan was not there. So Baba Atal went to Mohan’s house thinking to find him asleep.  When he heard that Mohan had died, he was very upset and said to Mohan “Get up. Don’t be lazy, just because you don’t want to give me a turn to bat. Wake up, say ‘Wāhegurū!’”  With Baba Atal’s spiritual powers, he was able to raise Mohan from the dead.  Baba Atal and Mohan’s family were very happy and the children went out to play. Soon this news reached the city and everyone was joyous about the miracle.

However, when Gurū Hargobind heard that his son had raised Mohan from the dead, he was very upset.  He had been working with Baba Atal not to use his powers to contravene God’s Will; He wanted his son to obey God’s Will.  So he told his son: “You have used your powers as I have warned you not to. Now if anyone dies, they will bring the body to us to bring that person back to life. Who will you bring back and who will you leave dead? Only God should decide who lives and who leaves this world. We should accept the Will of God with a humble attitude.”

Hearing this, Baba Atal understood the magnitude of what he had unintentionally done. He remembered how his grandfather, Gurū Arjan Dev was tortured when he could have performed a miracle to be free. He said to his father, “O True King, may you live for ages. I brought back my friend, and now I understand that I owe a life in return and that I must return to our True Home.” So Baba Atal went into deep meditation and with his spiritual power left his body.

When Gurū Hargobind heard that his son had so much reverence for God’s Will that he would sacrifice his own life to restore balance with the Hukam of God’s Will, he was deeply moved. He constructed a nine story Gurdwārā (one story for each year of Baba Atal’s life) in his son’s honor and placed a blessing upon anyone who visits this Gurdwārā (2) that their wishes would be granted.  That is why Sikhs will go to the Baba Atal Gurdwārā  when they visit the Golden Temple.

In this story, Baba Atal comes into a recognition of his father’s wisdom and is able to take spiritual responsibility for the consequences of his actions.  This brought his soul back into grace with the Divine order.

The Siri Singh Sahib, Yogi Bhajan said that meditating on this Paurī “imparts stability and patience.”(1) Patience comes when we are able to grasp the vastness of the universal tapestry beyond our own ego’s design.  This imparts a stability of knowing the Unknown self.

(2) – A “Gurdwara” is where Sikhs gather to practice their faith.  Click here to view a video about what to expect when visiting a Sikh Gurdwara.