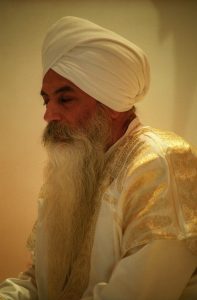 . . . Today we are talking about the concept of prayer. We fully understand the prayer is the power, we have discussed it, we can elaborate it, we can understand it, but basic situation is the prayer. There is a concept behind prayer. I am not trying to discuss with you today the method of prayer, method can be any and all told; some people kneel down and prayer, sometime sit cross legs and pray, some of you are just lie down and pray, some can stand on their head, legs up and can pray, there are lot of methods as somebody knows somebody, somebody does everything, but what is the concept of prayer? What is a prayer? Let us [discuss] it before we go into it, what is a prayer?

. . . Prayer is not talking to God, that is where Christianity goofed, totally taught you something wrong and because it all spread into the industrialized nation it is considered that, that a concept of prayer is to talk to God.  That is not true.

To tap into our own unknown, I am a human being with certain known powers, I have ten men under working in me, I have six servants, I have four houses, I have nine cars, I have this, I have that, all that juggling I am a governor, I am a president, I am a politician, I am nobody, I am a saint, I am everybody, I am a worker, I am this, you call it anything doesn’t matter.  There is a certain known concept of mine and there is a certain unknown concept of mine, which is my reserve, which is right behind me all the time; 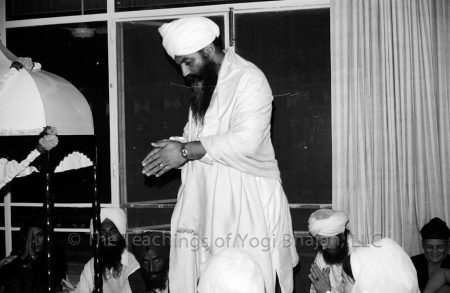 Prayer is not to talk to God.  That is also wrong concept given by Christianity– you are the sinner and you must redeem yourself. If I am made in the image of my God, what is my sin? How can image do a sin? If my construction is in the image of God, how can I sin and what can sin in me and what is a sin? I am very sinful when my unknown is not with me, I am weak, I am feeble, I go to temptation, I fall apart, I say things I do not deliver, I say things which are not true, I try to do things which have no concept, no reality, no reaction, I just want to get away with thing, I play politics with myself, I can juggle things with myself and that’s all I have been doing myself.  That does not mean that I am sinning. Simply when I am not connected with my unknown and I do not tap my own power of the unknown at that time I am weak.  My weakness is not somebody is making me weak, that is not true.

Nobody can make me strong and nobody can make me weak, I make myself strong and I make myself weak, when I connect to my unknown with my own prayer of my own reservation I am very strong and when I am not connected I am very weak, is that simple. I know you cannot believe it, because you have been trained and told something different all these years. Well, you believe that, just try to believe this   . . .The concept of prayer is to tap my own unknown for my known.  When known and unknown is united in oneness of the any self, God is alive. When known and unknown are separated in any concept, God is dormant; not dead, not gone. Is that clear? Therefore, power of the prayer has to be continuous.

Not at one time by sitting like this I can pray, no. It is a prayer, wonderful is thy Lord, look at the beauty of the sky, some see this as sky and some see this cloud and some see this as a God. Those who see whatever is happening and whatever is around me and what is all this is God they are always tapped into their known and unknown and those who are only tapped into their (?) yeah cloud, yeah that’s a cloud you know it and I know it, but who brought that cloud and who made the sky to look which is a dark sky to look it blue and one who sees that realm of consciousness feels it and experiences that is called God and that is a living

God and that is a living prayer.

God is so great whosoever touch that greatness must appreciate, and that appreciation of God is prayer, not what you want, give me a car, Mazda, I am your good son, that is not prayer, prayer is your concept of appreciating the Infinity of God which is your unknown.

It’s a relationship right here between the known and the unknown there is a relationship and appreciating the unknown, the vastness, the creativity and there are Keertam Nam, as God appears to you man worship clouds because God created them, He never knew something better, man worshipped mountain, man worshipped anything which looked to him huge and big and then man started worshiping snakes, man started worshipping what is that guy, what they call him boar, with this…Yeah man worshipped boar because in those days that was the only thing around the man and he used do this and tear the man apart. Man had no defense against boars. They will come and attack and stamp him; then man started worshipping bull. This man in concept is a pretty crazy animal, he worshipped anything which was little stronger than him and showed him little something. Even now you know they kill the bull and enjoy it, you understand, they feel it’s a great thing, what is there to kill a bull, take a gun, shoot him, there he is dead, no they do it so ceremonially and so many thousand people come around in arena and watch a poor little bull being killed in the atomic age where one atom head can kill millions in city, everything can be just nothing but ash and lava, if that world of today with that energy under our control we still vow to kill the bull, we call it bull ght, so where we have changed?

We are extremely primitive and extremely advanced and in-between we are hanging and that hanging of in-between between extremity, on primitivity, and advancement is called what? Tell me, civilization.

Now this is civilization. On one had we have a atom bomb on other hand we are ghting with the bull even today in Mexico you go, in Spain you go you will be shocked. I have still seen people worship… We made our God, we made our God with an elephant head we call it a Ganesh, we made our God with differently and we started worshipping him, we worshipped monkey God, we have so much fun with God and its ways and means, we say Christ came he was Jesus Christ poor simple carpenter of Nazareth, he gave us some truth, made us to follow good things, what we did? We put him on the cross and then we always hang him on the cross as the only thing he knows. Everywhere you see him hanging around the necks, you are hanging around the waist of the nuns and the priest, in the car, in the center of the car, the only thing he does, anything goes wrong Jesus Christ.

The concept is there, but proper mind and technology and rhythm is not with it. Prayer is the power. 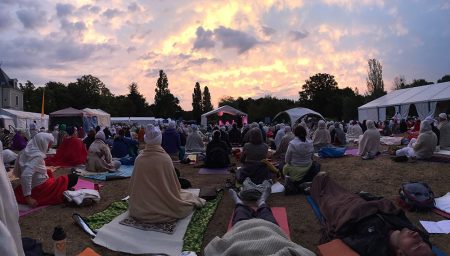 In the ambrosial hour of the morning, rise and praise the Lord.  Praise the infinite, praise the God, you will be covered; everything about you will be taken care, simple.

And once you start your day with something good and nice like that, then whole day you go under that rhythm. Prayer is the power to tap your own unknown, to bring it to your known and become radiant. [The] rest is a ritualistic situation. . .  Your power is the prayer and prayer is the power.  Without prayer, you are handicapped.

There is no other place.  You are handicapped, you are weak, you are not complete; that’s why we have cars, we have houses, we have every facility, but still we feel empty.  That emptiness comes to us because we have not got the [knowledge] of the unknown in the known of us.  It is that combination we are seeking as humans, it is that combination towards we are a failure or towards we are success. . .