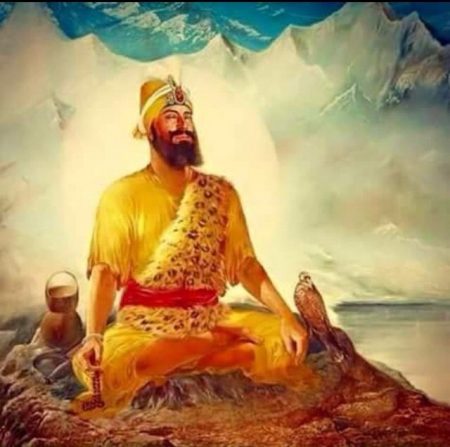 Before he was born into this life, Guru Gobind Singh explains how God came to him in his deep meditation with a call to serve in the world. In his own words, this is how he shares it with us:

“Now I relate my own story as to how I was brought here, while I was absorbed in deep meditation.The site was the mountain named Hemkunt, with seven peaks and looks there very impressive..That mountain is called Sapt Shring (seven-peaked mountain), where the Pandavas practised Yoga.There I was absorbed in deep meditation on the Primal Power, the Supreme KAL.In this way, my meditation reached its zenith and I became One with the Omnipotent Lord….

When the Lord ordered me, I was born in this Kaliyuga (Dark Age).I had no desire to come, because I was totally absorbed in devotion for the Holy feet of the Lord.When then God made me understand (His Will), God spoke these words and sent me in the world:” “When I first created the Universe, I created the ignominious and dreadful Daityas. Who became mad with power and abandoned the worship of Supreme Purusha. I destroyed them in no time and created gods in their place. They were also absorbed in the worship of power and called themselves Omnipotent. (Then I created) Mahadevs, Those who were fixed and ones who mastered air (Siddhas), (but) they could not reach the Param Purkh – Supreme Being, the Lord.

On whomsoever wisdom dawned, he started his own path.  None could realize the Supreme Lord, but instead spread strife, enmity and ego. The tree and the leaves began to burn, because of the inner fire. None followed the path of the Lord. Whosoever attained a little spiritual power (siddhi), he started his own path. None could comprehend the Lord, but instead became mad with ‘I-ness’. Nobody recognized the Supreme Essence, but was entangled within themselves. All the great rishis (sages), who were then created, produced their own Smritis. All those who became followers of these Smritis, they abandoned God. Those who devoted themselves to the Feet of the Lord, they did not adopt the path of the Smritis…..Everyone placed his own interest first and foremost and did not comprehend the Supreme Brahman.”

“To do this work the Lord sent me and then I was born into this world.As it was spoken to me, I am repeating the same (unto you), I do not have enmity with anyone.Whosoever shall call me the Lord, shall fall into hell.Consider me as His servant and do not think of any difference between me and the Lord.I am the servant of the Supreme Purusha and hath come to see the Sport of the world.Whatever the Lord of the world said, I say the same unto you, I cannot remain silent in this abode of death.”

You can read the full autobiography here

Guru Gobind Singh’s life gives us so many examples of how to face the greatest difficulties of life with grace and excellence, to see that we are here in divine service to God to support the manifestation of God consciousness (Dharma) on earth. Our challenges here may seem hard at the time but they can be of service when we face them through our Radiance and Faith.

Just as Guru Gobind Singh trained his warrior Sikhs to live at this excellence and excel in the face of adversity, so can we learn from his life, spirit and teachings to face the challenges of the day.

Guru Gobind Singh’s home is in Anandpur Sahib (City of Bliss). This is where he founded the Khalsa. It was the base where he trained Sikhs to live in their spiritual radiance. The Siri Singh Sahib, Yogi Bhajan built Dasmesh Sadan to serve as our home in that sacred place. We are inviting you to experience this spiritual home base. Please Join us this November 16 – 27, 2017 in Anandpur Sahib, India.