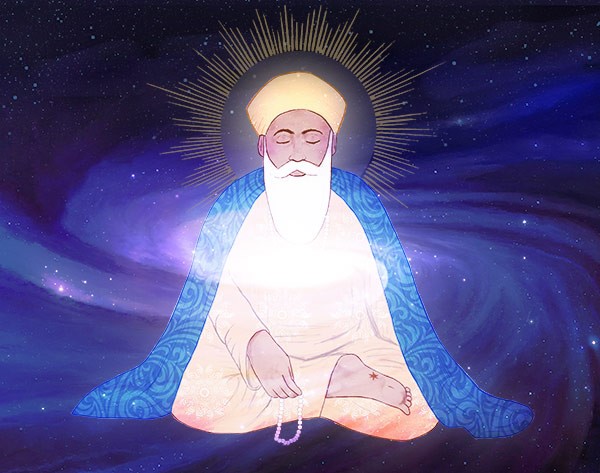 Sikh means student and we have to learn.  What is the necessity of that learning?  The greatest possibility of learning is that we must understand God is in us. God is around us. God is a part of us and we are a part of God.  That’s why Guru Nanak started with Ek Ong Kar – there is One Creator of the whole creation.

It was a new thought. God was there in many forms. Somewhere there was the concept of one God, but man never had the capacity to be recognized as part of God. Five hundred years ago, religion kept man separate from God. It was evident that you had to worship God. People thought, “God is somewhere up in the skies. There are seven, fourteen layers to the Guru.” There were a lot of stories. It was considered that God and man, and man and God, were two separate identities. So duality was practiced. People thought that when God wanted to improve mankind, He appeared in the form of a prophet or an avatar. That was the basic difference.

When Guru Nanak said man and God and God and man is the same, it brought the revolution. People started questioning, “How can that be?”  All religions admit that God created the universe, but they are not willing to admit God is in you. It is shocking to me that five hundred years later, the meaning of “Ang Sang Wahe Guru” is not understood.  Ang means any limb of the body which bends and works and moves; with it Wahe Guru, the God, is.

The second concept which Sikh Dharma developed was Akal, the deathlessness of the man and that of God as the ultimate relationship. People were not willing to believe this. There was a huge conspiracy against Nanak. In his own words, he said,

What Guru Nanak taught was not acceptable under any circumstances.  In cosmology, in creativity of infinity, in going through all the millions of suns which we know today.  The sun is just one star and we know thousands of stars like this exist, but still we question. This questioning was because of the fact that God is in front, which was not acceptable. So what did we do? We brought God into stones and into statues.

Technically speaking, man wants to accept God as he wants to. You know what that did?  Man never accepted himself or herself. For thousands of years, God was separate from man. Do you know how comfortable it is when you walk and God is walking with you? Talking what God is talking in you?  That should be the standard. That should be the elevated sense of God. Your behavior, your manners and your virtues should be that of Infinite Divinity. You know how comfortable it is? How powerful it is? How marvelous it is?

Well, that is what Sikh Dharma is all about: standard duplication of divinity into the royalty and reality of that creativity which, in essence, is nothing but divinity. This has to be accepted in the Age of Aquarius. That is what the Age of Aquarius is all about. The duality that God is separate from man and that you have to worship Him, pray to Him and do hard work to bring Him down?  No – it’s not what it is about. God will take you out.

I feel you all know it. So be firm in it. Be real about it and see how beauty and bounty comes to you; how prosperity and all powers serve you; and how mother nature nurtures you like the most beautiful human being.

Copyright 2002, The Teachings of Yogi Bhajan.