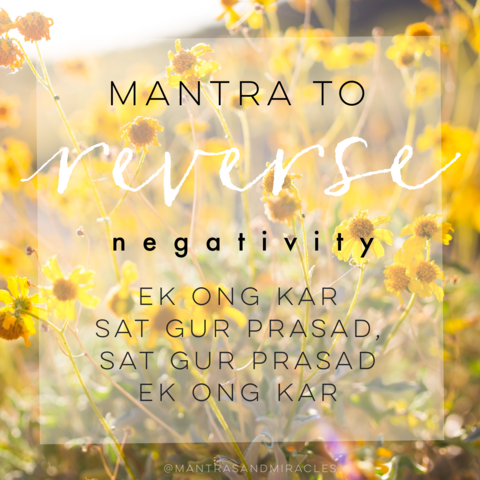 God and We are One.

I know this by the Grace of the True Guru.

I know this by the Grace of the True Guru.

God and We are One.

This mantra, also known as the Siri Mantra or the Magic Mantra, stops anything negative and removes all obstacles. It brings great intuition. If the mantra is chanted 5 times, it will stop the mind and put it into reverse gear. It can take you beyond duality and establish the flow of spirit.

It needs to be chanted with reverence. After chanting this mantra, anything you say will be amplified, so be positive and don’t say anything negative, at least for a while. This mantra can have a negative backlash if chanted incorrectly. So it’s best to invoke the sacred—chant or meditate before practicing this mantra.

Ek Ong Kar, Sat Gur Prasad is the most powerful of all mantras. There is not anything equal to it, nor can anything explain it. Ek Ong Kar, Sat Gur Prasad is a pritam mantra—the entire Siri Guru Granth Sahib* is nothing but an explanation of this mantra. It is so strong that it elevates the self beyond duality and establishes the flow of the spirit. This mantra will make the mind so powerful that it will remove all obstacles.

We call it the ‘magic mantra’ because its powerful effect happens quickly and lasts a long time. But it has to be chanted with reverence, in a place of reverence. When you meditate on this mantra, be sure that your surroundings are marked by serenity and reverence and that you practice it with reverence.

~Excerpts from a lecture by Siri Singh Sahib, Yogi Bhajan on April 26, 1976, where he taught this meditation. 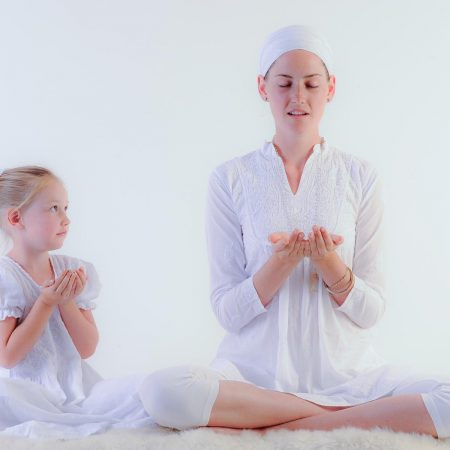 Meditation with the Magic Mantra

“Be kind, conscious, and compassionate. The whole world will be your friend.”

Mudra: Lift your hands to the level of your heart, palms up, elbows relaxed by your sides. Form a shallow cup of your hands by placing the sides of your hands together from the base of the palms to the tips of the Mercury fingers (pinkies). All the fingers are together but not rigid. Open the thumbs out away from the hands. The cup is not deep, the edges of the cup are about thirty degrees up from the parallel plane.

It is important to keep the “line of Mercury” connected; the outsides of the hands touch from the Mercury fingers to the base of the palms. Normally there will be no opening whatever, but some people will have a gap between their little fingers. Keep this gap to a minimum.

Eyes: Close your eyes and look into your hands through your closed eyelids.

Mantra: Chant Ek Ong Kar Sat Gur Prasad in a monotone, letting the breach find its own pace. One repetition of the mantra takes between four to five seconds. Continue for 31 minutes.

Begin with three minutes and work slowly up to the full time.

31 minutes of this meditation can keep you in a very elevated state. Practicing this over time can give you a certain stimulation which is beyond explanation. Remember to practice this mantra with reverence in reverent environments at all times.

This meditation can be found in Infinity and Me, available through KRI.

* The Siri Guru Granth Sahib is revered as the living Guru for Sikhs, a volume containing the sacred words of many enlightened beings who wrote while in a state of union (yoga) with God.

This article is courtesy of 3H0