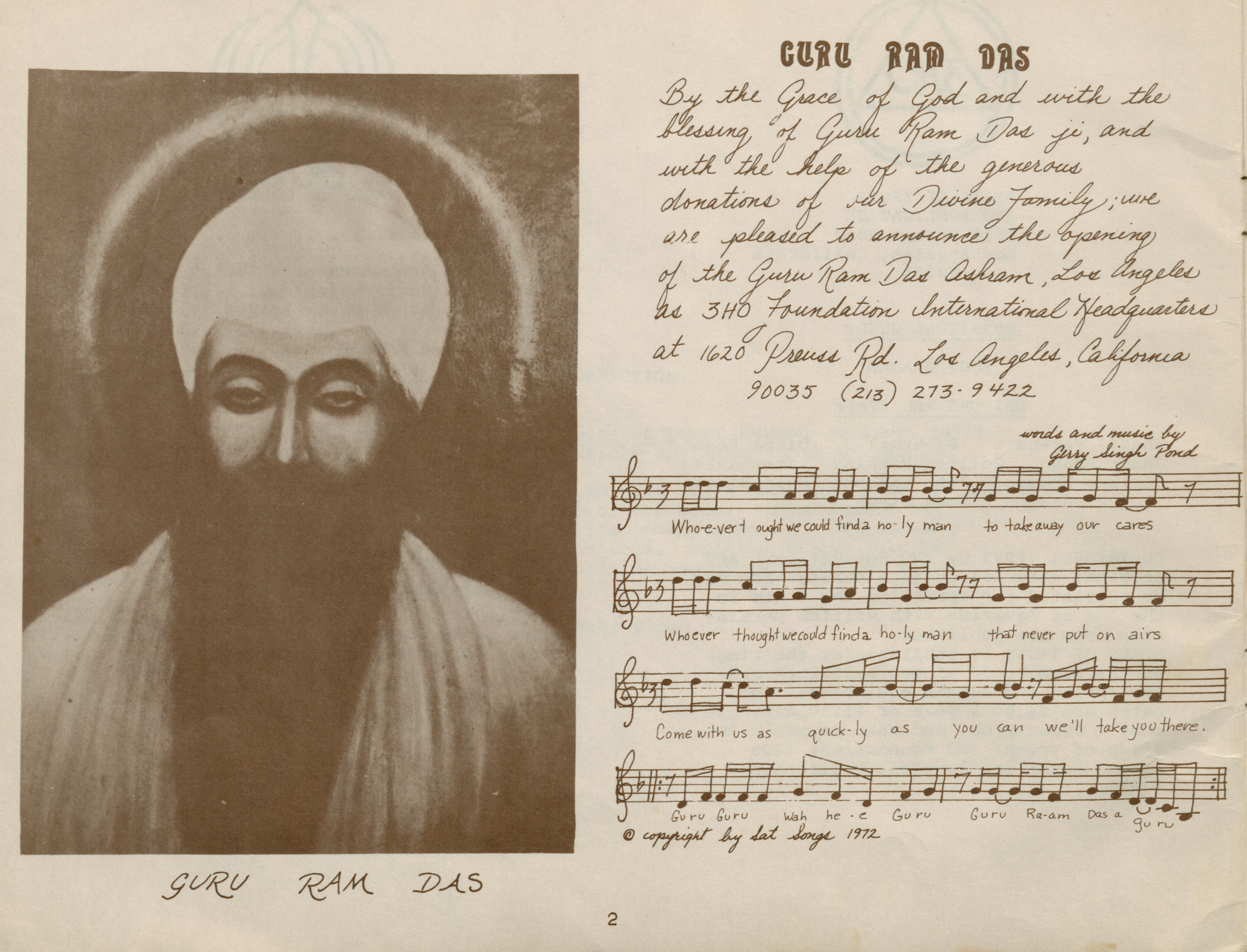 The above page is from the January, 1972 Beads of Truth issue #13, which both announces the opening of the Guru Ram Das Ashram in Los Angeles and shares a song written by Guru Singh, which is now fondly known as the “Golden Temple Song”.

In this post, we share more about both the Guru Ram Das Ashram in Los Angeles and the “Golden Temple Song”. 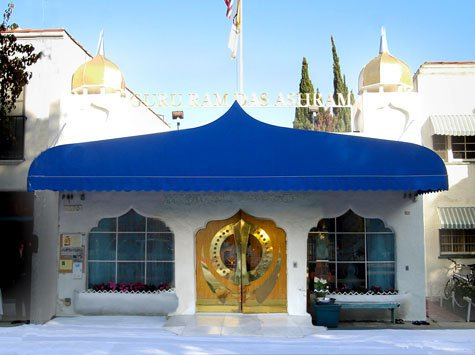 Arriving in Los Angeles in 1968, Yogi Bhajan began his mission to share the teachings of Kundalini Yoga, and to help people live healthy, happy and holy lives.  He first established Guru Ram Das Ashram as a yoga center in West Hollywood, and it was here in Los Angeles that Kundalini Yoga in the Western World was born.

In the spring of 1972, the ashram was moved to the current location, a former chiropractic and hydrotherapy office, where it was established as a formal Gurdwara.

Yogi Bhajan lived at Guru Ram Das Ashram until the early 1980s. He resided in the small living quarters in the back, joined by his wife, children and staff.  In that humble living room, countless came for his guidance, the Khalsa Council was born, both spiritual and world leaders have been welcomed and babies were named.

What is now a gurdwara with marble floors, then served as a sadhana room and gurdwara in the morning, yoga center by day, and is where the Siri Singh Sahib, Yogi Bhajan sat and taught classes two nights a week for over 15 years.

Guru Ram Das Ashram is a sacred place, where for nearly 50 years people of all walks of life have come to be healed, to meditate, to bow to Guru, and to find peace.  The walls of Guru Ram Das Ashram now resonate with the vibration of over 1900 Akhand Paths that have taken place on a weekly basis since those early days, and the chanting, prayer and divine Kirtan from gurdwara services that have been held here 365 days a year since its inception.  Countless individuals have come to partake of the Guru’s langar that has been served daily since the mid-1980s.

By Guru’s grace, all of these traditions continue, with daily gurdwara and kirtan, langar, meditation, seva and weekly akhand paths.  Literally the birthplace of Sikh Dharma International, Guru Ram Das Ashram in Los Angeles truly is, to us, the “Golden Temple of the West.”

Guru Singh remixed this song, “Whoever Thought We Could Find a Holy Man” or the “Golden Temple Song”, with students at Miri Piri Academy in 2002 on his album “Chantz 2 IMPAct Earth”.

Whoever thought we could find a holy man to take away our cares,

Whoever thought we could find a holy man who never put on airs.

Come with us as quickly as you can and we’ll take you there.

Take a hold of your Golden Temple. 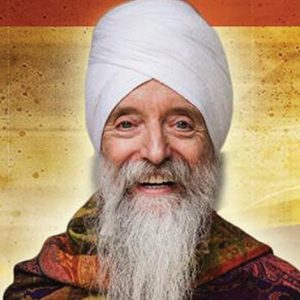 In January of 1969, after meeting Yogi Bhajan, he began his daily Kundalini Yoga practice. He was the first Westerner to wear the turban, and began accompanying the Master as he taught at Universities, lecture halls, spiritual centers and Sikh Gurdwaras around the world.

As chairman of the International Council of Sikh Ministers, Guru Singh has worked with spiritual and religious leaders of nearly every faith, working to connect diverse communities around the world. His extensive music background and knowledge of Sahaj Shabad (sound) therapy enables him to offer a unique approach to counseling, restoring the natural human physical, mental and emotional harmonies through meditation and applied sound.

Guru Singh has recorded a number of CDs, some of which are not currently available. His revolutionary and still very popular Game of Chants, a collaboration with his good friends GuruGanesha Singh, Thomas Barquee and Seal, was an early and very successful attempt to launch a new musical genre of “Spirit Rock”.

Anyone who has attended the annual Summer Solstice Sadhana in New Mexico will know him from his (very) early morning wake-up song – “Rise Up” – (also included in Game of Chants), as he serenades one and all with his guitar.

Guru Singh is a third generation yogi and teacher of Humanology and the Kundalini Yoga Experience. He is a musician, composer, author and a Minister of Sikh Dharma, with a Doctorate of Divinity. He is one of the Founding Directors of the Miri Piri Academy, an international elementary through high school in Amritsar, India, where students from around the world benefit from an academic curriculum delivered with a spiritual-global focus.

Members of his family lived in India in the early 20th Century. His great aunt studied with Paramahansa Yogananda (Autobiography of a Yogi) and traveled with him to the US and served him until his passing in 1952. He was an early mentor for the young Guru Singh (born 1945) in his family home in Seattle.  A devoted family man, he has bases in Los Angeles, Seattle and India, and teaches around the world with his wife.  They have 2 children and grandchildren.  Visit GuruSingh.com for more information about him.