Virtually every spiritual tradition teaches that 10% of our income belongs to God and that we give it to God through our spiritual source, which in Sikh Dharma is Das Vandh. Das Vandh means “the tenth part” and represents both the concept and the means given us by the Siri Singh Sahib (Yogi Bhajan) to exercise the concept. While it is true that in giving to Das Vandh, we fund dharmic programs, it is also true that by tithing, we open up the universe’s channels of prosperity for ourselves. We are each meant to be prosperous; the key to prosperity is giving and the most powerful form of giving is tithing, i.e., giving 10% of our income to God.

If you plan to begin tithing when you can afford it, you likely never will. It is the leap of faith, the act of commitment and surrender that causes prosperity to bear fruit. To make this same point, the Siri Singh Sahib said that “the toothless wolf gets no credit for becoming a vegetarian.” If your income is, say, $100 per week and your bills are $150, the first bill to pay is the $10 to God. Then watch what happens. In the words of Zen Buddhism, “Leap and the net will appear.”

There are those who say, “But I don’t know how wisely the managers of our Dharma are spending the money.” When they say this, ask them about their financial struggles, because they are certainly having them. We tithe in the consciousness that we are giving to God. We do not ask God for an accounting; we do not ask God for receipts. To do so is to miss the point as well as the opportunity.

I have been asked if we can’t just give 10% to charity, or even 5% to Das Vandh and 5% to the charity of our choice. In choosing, we remove the element of surrender, the leap of faith that brings prosperity. It is good to give to charity, but the energy is different. First, give your 10% to God. Whatever you give above that to the charities of your choice is by God’s grace.

Can I tithe locally to a dharmic cause? Again, the blessing comes from the act of surrender. Yogi Bhajan, the master, taught us to tithe to the central organization he established and built throughout his lifetime. He also taught us to pass on the teachings exactly as they were given to us.

What’s more, prosperity is not necessarily about having money. It is the knowledge that God provides us what we need when we need it and the contentment that comes from that knowledge. Those who made a great deal of money and then took their own lives when they lost it in the Great Depression or the more recent Great Recession were never prosperous. They didn’t have money; money had them.

This is not to say that I don’t have my struggles, just that I always come through them standing firmly on my feet by the grace of God and Guru. Even Guru Gobind Singh, when he had lost all and was wandering alone in the woods, said, “Lord, if you want me to be penniless, so be it.” His surrender to the will of God caused his wealth to return; his prosperity had never left.

The Siri Singh Sahib taught us to give fully 10% of our income to Das Vandh — which in my experience means before taxes — and thus to plant the seeds of the prosperity writ large in each of our destinies, awaiting only the harvest of tithing. 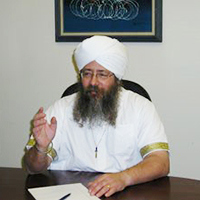