Bhajan is a beautiful word in Sikh Dharma.  It means to create a vibration strong enough that your heart creates a call to the Infinite.  This is your spiritual song.  When we meditate this way, vibrating the Infinite Cosmos within us, we open the path for transformation as it allows God to come through in our lives.

Through the practice of Bhajan, of vibrating to the Creator within our heart and spirit, we call on the Infinite Creator to come into our being and vibrate within us.  This expands the power of the Infinite Creative energy within us.  As we fill up with this energy, it comes through us to uplift and transform every situation.  We don’t have to struggle with our environments, we just need to focus on building the vibration of the Shabad within our being.  As this vibration grows it builds the power to deal with the changes in the world that are so necessary at this time.  This idea is explained in the 5th Sutra of the Aquarian Age: “Vibrate the Cosmos, and the Cosmos will Clear the Path.”

Story of Creating a Vibration

Several years ago, Snatam Kaur led a Shabad Class where she invited everyone to ‘become’ the words of the Shabad or mantra within themselves.  For example, if the shabad or mantra states “God and me are One” then the instruction was to feel that and let the vibration of that feeling come through your voice.  She invited everyone to experience it and let that grow into a powerful song.  After the class, we went before the Siri Guru Granth Sahib to have a mini-Gurdwara, where Snatam Kaur led everyone in her chanting.  Her eyes were closed and she was bringing the longing, the devotion so strongly through the vibration of her singing.  It was not directed at any of us in a mutual manner (as in a concert), instead it was between her and her Creator.  This vibration built up such a devotional force that people started to come into the Gurdwara from outside to see what was going on.  There was no sound system to carry her voice outside but the vibration of that longing, that devotion had penetrated through the walls and reached others who were outside.  They felt something was happening (vibrating) within.  A steady stream of people came into the Gurdwara to see what was happening: their faces read as if they were looking to see what was going on that they hadn’t heard about.  Each person came in, saw that it was a mini-Gurdwara, bowed to the Guru and left.  This kept happening throughout the entire time Snatam Kaur sang.  She had no idea who came in as her devotion was so strong it kept her in her own zone with eyes closed, but the vibration of her devotion carried such a force that it affected and brought in people in the surrounding area, even in the silence outside the room.

You can practice this yourself.  Don’t think about how you sound, if you are on the right pitch.  Just feel the words: for example: Bhaj Man Mere Haree Ka Naam (Vibrate the Name of the Creator O My Mind).  Feel and create that vibration as you sing this. Visualize that you are vibrating the identify of the entire Creator (Har) behind the Creation with every cell of your being; let that vibration come through as you sing this shabad.  Then get louder and louder: let it out!  Build the vibration so that the Universe hears you.  Don’t worry about anyone else, just sing, to create the call for the Universe to hear you.  Make it so strong that God has to hear you.  That is the vibratory call within you for your Creator.  Let God wake up and hear you: make your vibration and your call heard

“If in meditation we can sit down and feel we are vibrating a signal to the Infinity and receiving back the contact…feel that the entire Universe in creative form is with us, which we call God, because we are created creatures…If you get to do it constantly for a solid fifteen minutes, you will feel how beautiful, how light, how enjoyable you are.”  ~ Siri Singh Sahib, Yogi Bhajan (3/24/72)

Read more excerpts from this lecture

Which Mantra or Shabad to use for this practice?

Any mantra from the Shabad Guru will work for this practice. Here are some examples you can choose from, or just use a simply mantra like Sat Nam Wahe Guru.

“Mantras are the mind vibration in relationship to the Cosmos. The science of mantra is based on the knowledge that sound is a form of energy having structure, power, and a definite predictable effect on the human psyche…Mantra takes the vibratory effect of each of your molecules into the Infinity of the Cosmos.”-Siri Singh Sahib Yogi Bhajan 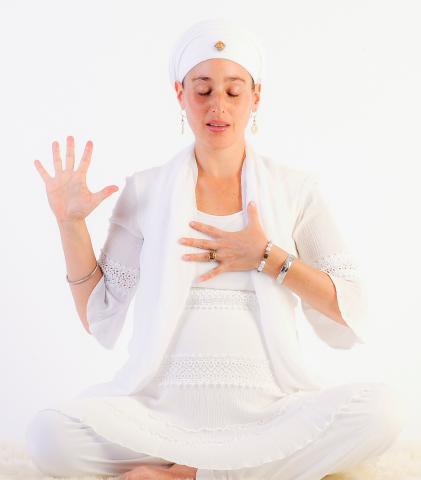 Bhajan is based in spiritual song, singing and chanting from the heart, connecting with the Divine and bringing devotion to connect with Shabad Guru. Guru Kriya is a strong Bhajan practice, making the body an instrument of devotion in singing to God.

Click Here for the Instructions to Practice Guru Kriya