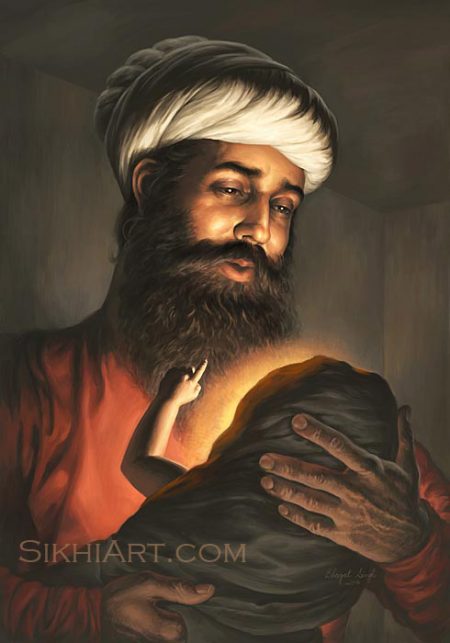 As was customary in India in the 1400s, an astrologer was called to cast the horoscope for a newborn infant. He amazed everyone by saying, “This is no ordinary child. This infant is a divine incarnation.” He predicted that this soul would have a profound influence on the world. The astrologer was definitely right, for the child grew up to be Guru Nanak, the first in the line of Sikh Gurus.

Born in a culture where people lived by the caste system and looked to the priesthood and so-called “holy men” as their connection to God, Nanak and his companion Mardana, who was born a Muslim, traveled on foot over thousands of miles across India and Asia to enlighten people with simple songs of devotion. Everywhere they went, people’s hearts were opened and filled with the love of God and humanity.

In addition to being a poet and a singer, Guru Nanak was a great saint, seer, mystic, and prophet. He rejected the notion of divisions between people based on religion. He taught that there is only One Creator who created all of us, so there exists a fundamental brotherhood and sisterhood among all human beings. His simple but profound teachings were firmly rooted in the basic divine identity of all people. When living with awareness of the Divine Light within everyone, human life becomes a profound experience of love and truth, bringing patience, peace, and contentment. His universal message is as true today as it was then. Listening to his words and songs, we are reminded of who we really are, just as his listeners discovered then.

Guru Nanak achieved enlightenment sometime around the age of 30. After disappearing into a river and meditating in the water for three days, he emerged having had a powerful vision of the nature of reality, divinity and human existence. He sang that vision in the song known as Japji Sahib—the “Song of the Soul.” Described in his own words, Japji Sahib gives a rare picture of what a Master experienced at the moment of his enlightenment. It became the foundation of a new spiritual tradition.

Guru Nanak traveled extensively. He brought together people from all walks of life, from beggars and thieves to kings and slaves. After his travels, he formed what today we would call a “commune” or “spiritual community” at a small village called Kartarpur (City of God), where he lived as a farmer with his family, working side by side in the fields each day with his students and continuing to teach everyone who came to learn from him.