POSTURE: Sit on the heels in Rock Pose, with hands on thighs.
MANTRA: Recitation of Guru Gobind Singh’s Jaap Sahib.
MOVEMENT: Begin bowing the forehead to the floor to the Namastang rhythm:

With the recitation:
Bowing 4 counts, resting 1 with the music. (Consider one cycle of touching the forehead to the floor and rising as 1 count.)

This can also be done with the arms and hands in Yoga Mudra: hands interlaced at the base of the spine, palms facing up. Arms would stretch up as high as possible when the forehead touches the ground.

TIME: Continue for the entire recitation of the Jaap Sahib. 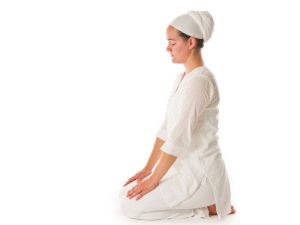 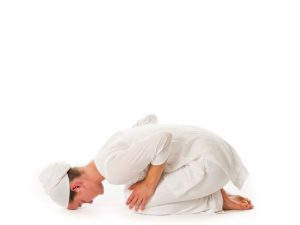 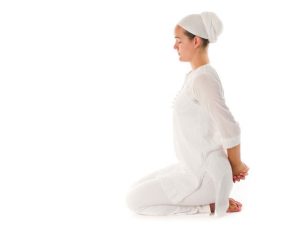 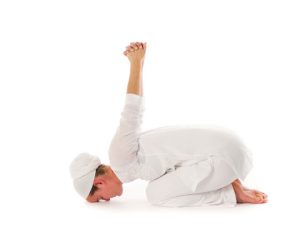 “Jaap Sahib is Guru Gobind Singh’s bani, it comes from the third center of balanced naad. So that we would not become beggars at the doors of others and be insulted, Guru Gobind Singh became one with God and recited Jaap Sahib. You have to understand: the Sikhs of Guru Gobind Singh were in a position to run at the speed of a horse. What was the miracle that gave them such power? Jaap Sahib. Jaap Sahib gives you the strength of mind behind every muscle of you. And if we have to face challenge or change, take the Name of God everywhere, with every breath. This is how we can do it. That is the way to be spiritual. Everything you do should be right from your spirit, and your spirit should be in it. That’s the way you can succeed. Nothing else will work it out. That’s God is the way we have been taught. It’s the oldest method, because man wanted to be with God and so he was told to pray and meditate. That is where I differ. I have experienced and I believe that these things are there to make us highly sensitive, absolutely creative and extremely intuitive. It doesn’t matter how rich you are, how healthy you are or how good you are. It doesn’t matter if you have all the faculties of life which you want to have. If you are not intuitive, you are dumb. That’s how pain comes, I am trying to take you past that. For that you need new blood. That’s why we are doing these exercises, so that the glands can work. Jaap Sahib is the salutation to God in which Guru Gobind Singh recites every facet of God. As many facets as have been explained there, that many facets you have to cover in your life. That’s what Jaap Sahib is. But to do that, you require about 250 years to learn, practice, experience and project each facet. I don’t think we have that time. So basically, the idea of the mantra is to give reach God is as easy as for me to go from here to my ranch. So, when victory came, Guru Gobind Singh praised the Lord in naad. That is what is beautiful about Jaap Sahib: it raises the soul and the Self, the being. And that is what we are talking about. I’m just trying to give you the experience as I learned Gurbani, and as I learned Kundalini Yoga.

Mimick this Jaap Sahib. You are not mimicking the words, you are recreating the creative essence of the word, the naad. This is a powerful way that you can learn about sensitivity. If you can practice this meditatively, then whatever people say, you will always compute what people mean. It will give you a totally different dimension. It will take away unawareness, foolishness and nonsense. What a person is saying and what he actually means are two different dimensions and that is what I want you to experience.” ~ Siri Singh Sahib Ji

Excerpt From:  “I Am a Woman: Creative, Sacred & Invincible.” Kundalini Research Institute